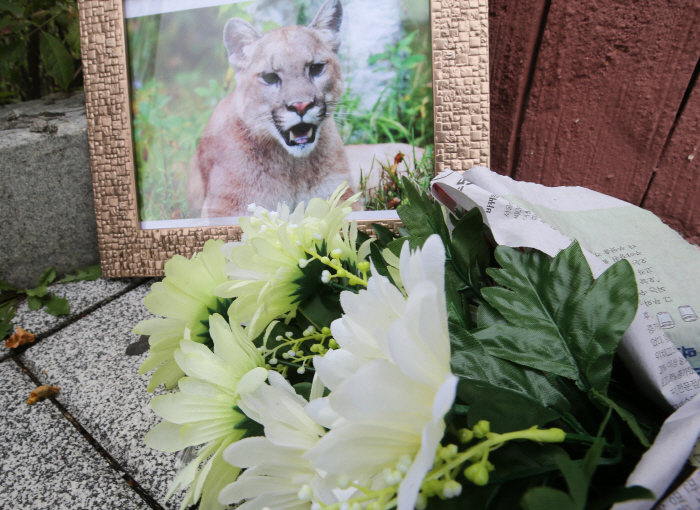 A framed photo of the puma alongside a bouquet of artificial white chrysanthemums and commemorative messages were found at the entrance to the zoo yesterday. (image: Yonhap)

DAEJEON, Sept. 21 (Korea Bizwire) — People have continued to cherish the memory of Pporongi, the puma that was shot and killed after escaping from Daejeon O-World.

A framed photo of the puma alongside a bouquet of artificial white chrysanthemums and commemorative messages were found at the entrance to the zoo yesterday.

The items were presumably left there yesterday morning by someone who was deeply saddened by the loss of the puma.

The messages read, “I won’t forget you, puma,” “I’ll remember you forever,” “I’m sorry there is nothing I can do.”

One visitor to O-World was initially glad to hear that no one was injured from the affair but felt that officials had overreacted as the puma never left the zoo.

“Even though the puma is merely an animal, I feel sad that it had died in vain after being kept locked up in a cage all its life,” said the individual.

Still others expressed their sorrow by filing petitions via the Blue House’s website regarding animal treatment and how the situation could have been better managed.

To make matters worse, when the zoo operator announced its plan to turn Pporongi’s corpse into a stuffed specimen, petitions vehemently opposing this idea plastered the petition forum.

One petitioner lamented, “What did the puma do wrong to be locked up in a cage? And now, it has to be stuffed?”

Another petitioner called for the dead puma to be treated with respect after a life-long hardship of fulfilling the desires of humans. “Please create a space within the zoo that commemorates the puma,” said the post.

The Daejeon City Corporation, which operates the zoo, said it has axed its original plan to turn Pporongi into a stuffed animal after the overwhelmingly negative response from the public regarding the decision.