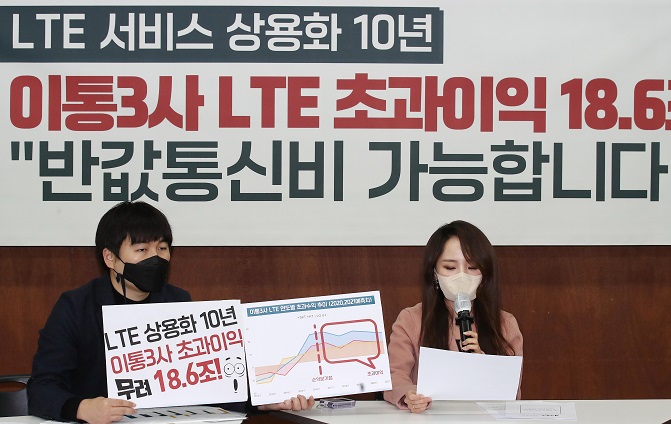 Members of the civic group People’s Solidarity for Participatory Democracy hold a press conference at the group’s headquarters in Seoul on Dec. 28. (Yonhap)

The People’s Solidarity for Participatory Democracy analyzed LTE sales statistics for the period between 2012 and 2019 that the top three mobile carriers submitted to the Ministry of Science and ICT.

The analysis showed that the three companies recorded profits of 11.2 trillion won during the 2012 to 2019 period.

Estimating profits for last year and this year that have not yet been disclosed on the basis of proportion with the number of subscribed lines, the civic group claimed that the big three chalked up excess profits of 18.6 trillion won (US$15.6 billion) through LTE services during the 2012 to 2021 period.

Given that profits could be increased if mobile carriers reduced their massive marketing expenses, the civic group pointed out that they have sufficient room to cut the price of their services.

The civic group stressed that the combined annual marketing expenditures of the top three mobile carriers are estimated at about 7 to 8 trillion won, two or three times higher than their combined annual operating profits.

“The nature of the mobile telecommunication industry lies in the evolution of networks and services by making up for the loss of new services with profits gained through existing services,” an official in the mobile industry said on condition of anonymity.

“Accordingly, it’s not reasonable to see LTE and 5G separately.”