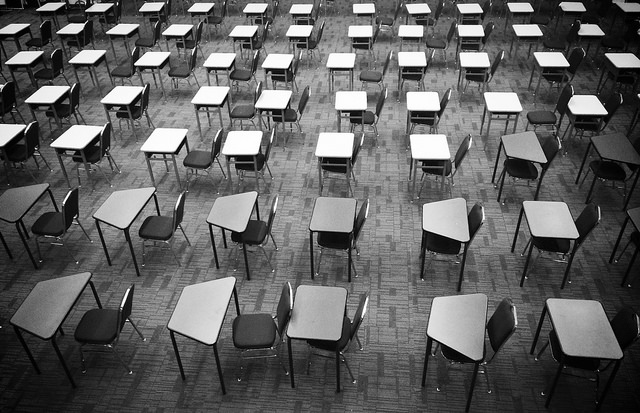 With 400,000 people preparing for civil service tests each year, many are demanding that the guidelines be amended as they violate basic human rights. (image: Thomas Galvez)

To everyone’s surprise, these were actual guidelines given to proctors for Gyeonggi Province’s local government employment examination held by the Gyeonggi Civil Service Commission on June 27 of last year.

Since most of the examinees are over the age of 20, using ‘urination bags’ in an open space is clearly a serious violation of human rights, although this regulation has been in place for a long time.

The Suwon Human Rights Center brought this issue to the surface when it became aware that the policy of restricting the use of lavatories during examinations was still in practice.

The local government employee examination held on June 27, 2015 had 31,819 examinees taking the test at 69 schools within Gyeonggi Province. The proctors in 1,567 examination rooms followed guidelines that prohibited the examinees from using lavatories. Only handicapped or pregnant examinees were allowed to use lavatories if pre-arrangements had been made.

If examinees left the room due to emergency, they had to submit their examination papers and were not allowed to return.

The problem arose because both male and female examinees had to go to the back of the examination room and use provided ‘urination bags’. Some examinees refused to follow the guidelines, but the proctors strictly imposed the rule.

The Suwon Human Rights Center advised the Suwon City Civil Service Commission to change the proctor guidelines when it became aware of the inhumane practice. The Suwon City Civil Service Commission determined that the proposal was reasonable and sent an official request to Gyeonggi Province for a revision of the guidelines on July 16, 2015, and Gyeonggi Province, too, made a proposal to the Ministry of Interior considering that the examination guidelines may apply to national and local government recruitment examinations as well.

However, the Ministry of Interior did not accept the proposal, insisting that having a fair test was far more important than guaranteeing the basic human rights of examinees.

As such, the Suwon Human Rights Center eventually filed a petition to the National Human Rights Commission on September 3 of the same year. The center decided that the system would not improve unless a change was made at the national level.

The final verdict has yet to be issued.

“Examinees are informed about the lavatory use guidelines well ahead of the examination day, and a urination bag is even provided for their convenience,” said a government official from the Ministry of Interior. “Many examinees are concerned with fairness if using lavatories is allowed during the examination. The decision should be made after listening to different opinions,” he added.

“Examinations typically last for 60 minutes, 140 minutes at the maximum, so examinees should be able to control their water intake. The decision has not been made by the National Human Rights Commission, but solving problems of both fairness and human rights will be key,” he concluded.