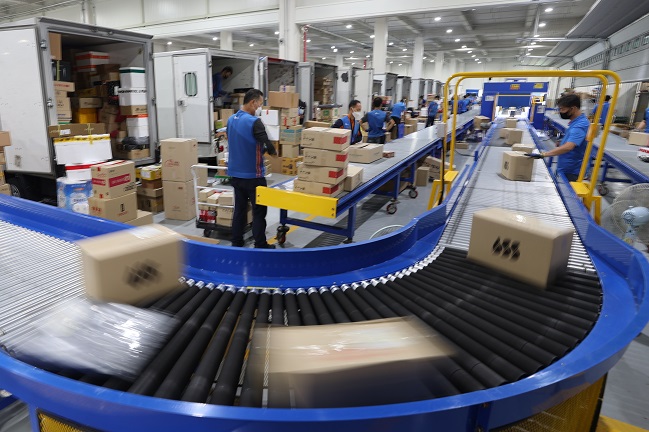 This Sept. 23, 2020, file photo shows CJ Logistics workers busy at a terminal in Gimpo, outside of Seoul, ahead of the annual Chuseok holiday. (Yonhap)

SEOUL, May 18 (Korea Bizwire) — The landscape of South Korea’s early-morning delivery market is shifting as logistics giant CJ Logistics Corp. has entered into an agreement with the country’s top online portal operator Naver Corp. to join the fast delivery market.

The two parties recently announced that they will strengthen cooperation in logistics area, including the launch of a same-day delivery beta service.

Same-day delivery means that a customer’s order will ship out on the same day the order is placed. The beta service will focus on categories such as infant care and daily necessities.

Even in the area of the early morning delivery, the two parties plan to launch a beta service in the latter half of this year. At present, CJ Logistics is providing next-day delivery service for Naver.

The two parties have strengthened their partnership after signing a share swap agreement in October 2020.

Industry watchers said that the two companies would occupy a substantial part of the market demand as Hello Nature Co. and Lotte ON have withdrawn from the early-morning delivery market.

According to Naver, the demand for its next-day delivery service more than doubled in April compared to the figure recorded in June 2021 when the service was launched.