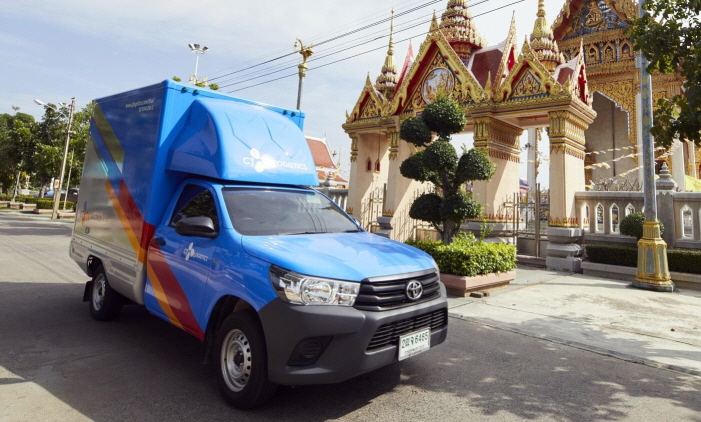 This photo provided by CJ Logistics Corp. shows one of its delivery trucks in Thailand.

The company began its parcel delivery service in Thailand in 2012, after entering the country in 1998 to provide logistics service for various international and domestic enterprises.

As part of its expansion plan, CJ Logistics said it will establish a 71,900-square-meter distribution center in Bangkok by May next year, which will allow it to handle up to 400,000 boxes every day, a 10-fold increase from the current level.

It also plans to raise the number of couriers to some 4,300 from the current 630, and operate 200 branch offices throughout the country by 2020, with 16 among them planned to be launched this year. The company currently has 74 branches in Thailand.

“We have been keeping our eyes on the Thai e-commerce market, which is expected to post double-digit growth every year, as well as its mobile-friendly consumers,” Cha Dong-ho, the company’s vice president in charge of parcel service, said during an event in Bangkok on Saturday.

“We will provide a globally competitive service, one that can touch our customers, and become Thailand’s No. 1 delivery company.”

The size of Thailand’s logistics industry was estimated at 5.4 trillion won (US$4.87 billion) last year, and its e-commerce market has been posting an average of over 20 percent annual growth in recent years, according to the Korean firm.