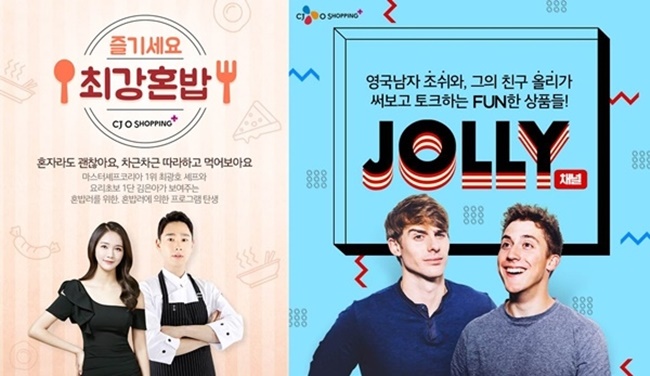 The major South Korean TV shopping channel announced on Thursday a number of new ‘media commerce’ programs scheduled to air at midnight during the week.

The term ‘media commerce’ refers to the collaboration between shopping channels and TV entertainment.

An increasing number of celebrities have been tapped to promote products on shopping TV channels in South Korea, as more channels bank on the friendlier image of YouTubers and comedians to attract younger viewers.

Beginning with the reality show-inspired program ‘Yolo X2’, which first aired earlier this week, a total of four programs will air until the end of April on CJ O Shopping.

Each program, which is scheduled to air for 30 minutes, will also be broadcast on Facebook and YouTube, as well as CJ Mall, an online shop.

YouTuber Josh Carrott, who goes by the name of Yonguk Namja (British man), will promote creative products alongside his friend Ollie Kendal on a new program named ‘Jolly TV’, while the winner of the third season of Master Chef Korea will teach viewers how to prepare simple dishes designed for one person.

“Thanks to the media commerce programs inspired by web drama and reality series, CJ O shopping boasts three times higher ratings and order volume among shoppers in their 20s and 30s,” a senior official at CJ O Shopping said.