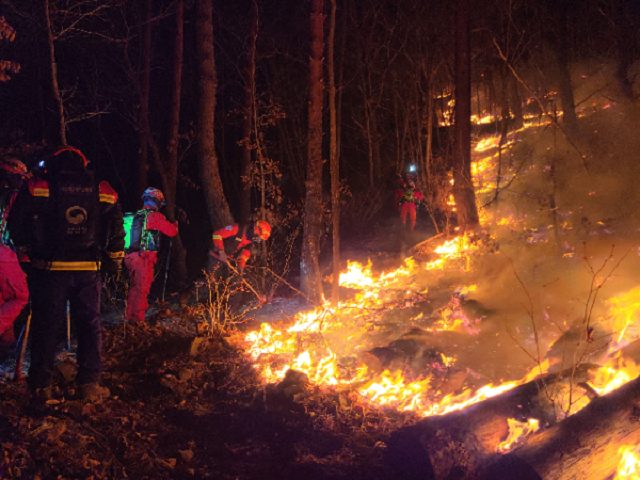 Firefighters conduct operations to extinguish a forest fire in Jeongseon, some 210 kilometers east of Seoul, on Feb. 21, 2021, in this photo provided by the Korea Forest Service.

DAEJEON, April 16 (Korea Bizwire) — The removal of fallen leaves and the pruning of tree branches to keep the density of forest at an adequate level can help minimize the damage caused by forest fires.

The National Institute of Forest Science (NIFS), which operates under the Korea Forest Service, released the results of a study on the facilities adjacent to the site where a large forest fire occurred in Andong, North Gyeongsang Province in February.

Despite being located in a fire-sensitive area, the facilities were not impacted significantly by the large forest fire, despite being surrounded by forest and situated in the path of the fire.

In addition, the pine trees that were densely planted around the facilities were caught in the fire.

Nonetheless, damage from the forest fire was minimized since the amount of fallen leaves – which act as a kind of fuel for forest fire – in the neighborhood of the facilities was significantly lower than in areas that were heavily impacted and burnt by the fire.

The NIFS study showed that the risk of being engulfed by forest fire can be reduced by pruning branches up to a height of two meters above the ground and ensuring that trees are spaced apart by more than six meters.

For facilities that were not damaged by the Andong forest fire, a concrete wall between the forest and the buildings blocked the fire from spreading.

The wide access road and turning space for vehicles also made it easier for firefighting vehicles and personnel to access the facilities.

“Three factors play a key role in forest fire: climate, terrain, and forest. Among them, only forest can be managed,” said Kwon Chun-geun, a researcher at the NIFS.