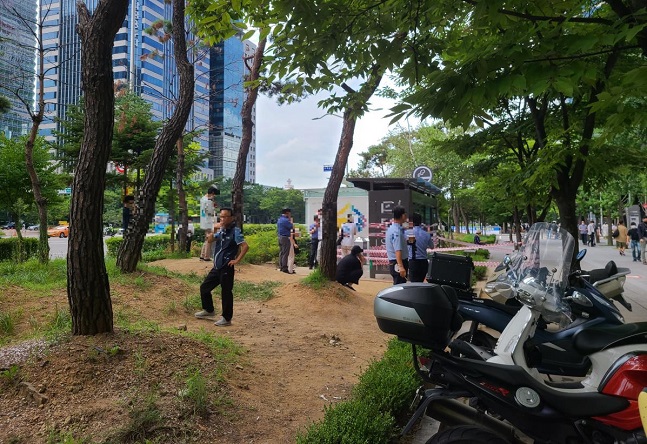 In this photo taken on July 14, 2021, citizens smoking near an outdoor smoking booth in Yeouido, Seoul that banned the use. (Yonhap)

SEOUL, July 16 (Korea Bizwire) — As the spread of COVID-19 is accelerating in Yeouido, a business district in Seoul that is home to many financial services companies, South Korean health authorities banned the use of outdoor smoking booths in this area until July 31.

The move, however, is stoking controversy among some citizens who say that such a measure will hardly achieve a meaningful effect since smokers will simply gather in other places, to the detriment of non-smokers.

On Wednesday, it was not rare to see groups of smokers gathered in flower beds or parks around the closed smoking booths in Yeouido.

Such scenes were common even in some desolate areas such as parking lots or apartment complexes.

“When I smoked in smoking areas, I paid attention to others’ eyes and tried to maintain proper social distancing. After the ban took effect, however, I pay less attention to such rules since I smoke sneakily in hidden areas like flower beds,” an office worker said.

“The policy of simply shutting down all of the areas that look dangerous would provoke nothing but resistance from citizens without achieving any meaningful effect,” another office worker said.