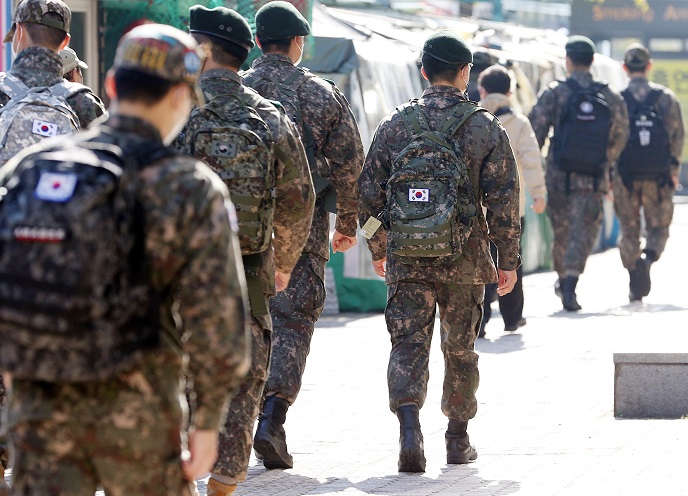 Soldiers walk outside a bus terminal in eastern Seoul on Oct. 25, 2021. (Yonhap)

SEOUL, April 26 (Korea Bizwire) — With social distancing measures being lifted, young adults in South Korea are increasingly concerned about when to join the military.

When college students were de facto banned from enjoying life on campus as lectures were given online, they lined up to carry out their mandatory military service.

Now, however, many of them are increasingly seeking to delay their military service to enjoy the return to in-person classes and campus life.

By law, all able-bodied South Korean men between the ages of 18 and 28 are required to serve in the military for about two years in a nation that is facing a nuclear-armed North Korea across the world’s most heavily fortified border.

The Military Manpower Administration said some 105,390 people applied for military service between January and March this year, down by 20.2 percent from last year (132,110 people).

Another 2,202 people decided to delay their enlistment between January and March this year, which was 6.5 times more than last year (309 people).

“My friends who have just joined the military were regretting their decision to get enlisted this time around, as schools are opening up their campuses and the military is bringing back its large-scale drills,” said Cho Seok-min, a 21-year-old student at Konkuk University who was discharged last September.