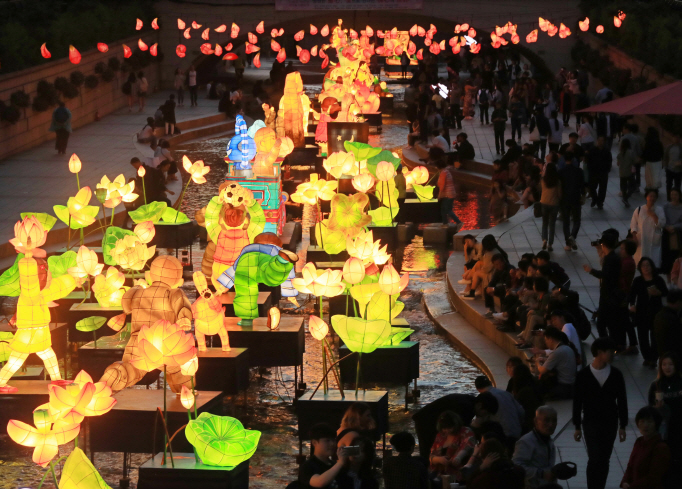 Lotus lanterns of various shapes and colors are on display along the Cheonggye Stream in downtown Seoul on May 7, 2018. (Yonhap)

SEOUL, May 3 (Korea Bizwire) — Hundreds of thousands of colorful lanterns will light up streets in Seoul’s city center when an annual festival to celebrate Buddha’s Birthday begins this weekend.

Organizers will hold a ceremony on Friday night to turn on the lights of traditional Korean lanterns of various shapes and colors on display along the Cheonggye Stream in downtown Seoul and at two major Buddhist temples in the city.

The lantern gala is a 1,200-year-old tradition in Korea, during which time folks pray for a rich harvest and their nation’s well-being.

Tens of gigantic paper lanterns representing Buddha and his stories and symbols will create a magnificent wave of light along the stream on spring nights.

Also on display are those in the shapes of fish, butterflies and birds in addition to traditional Buddhist images, such as Buddha’s portrait and Buddhist figures like the Sacheonwang, or Four Divine Guardians, and legendary animals like dragons and white elephants.

Jogye Temple, the headquarters of the Jogye Order of Korean Buddhism, and Bongeun Temple in the posh Gangnam district have been already transformed into kaleidoscopes of color, bedecked with vibrant lotus-shaped lanterns that symbolize the wisdom and compassion of the sage. 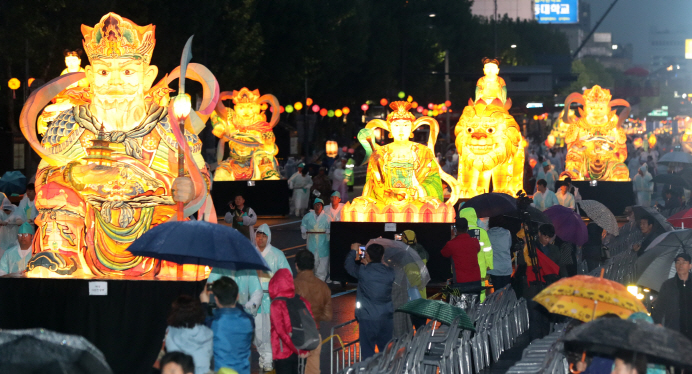 The lotus lantern parade takes place in downtown Seoul on May 12, 2018, ahead of Buddha’s Birthday. (Yonhap)

The lantern exhibitions will be followed by a massive street parade of lotus lanterns and other cultural events on Saturday night.

The parade commences at Dongguk University and works its way along Jongno, the main street of central Seoul, before finishing at Jogye Temple. Jongno Street and surrounding roads will be blocked off for the event over the weekend.

Animated dragons, tigers, huge lotus flowers and replicas of the Buddha himself float down the streets, along with music by street performing troupes and Buddhist monks.

The parade culminates with the Hoehyang Hanmadang, or post-parade celebration, nearing Jogye Temple at night. With a rain of paper flowers, all participants and spectators join together and celebrate the night of “harmony” a week before Buddha’s birth.

The next day, Jogye Temple will run hundreds of booths that provide visitors a chance to experience making paper lotus flowers and stringing together Buddhist prayer bead bracelets.

Traditional performances and ceremonies will be held simultaneously in the streets surrounding the temple compound, as well as offerings of temple food.

Buddhism, introduced to the Korean Peninsula in the first century B.C. via China through India, has since taken root as a popular religion. Buddhists account for nearly a quarter of the total Korean population, followed by Protestants and Catholics. 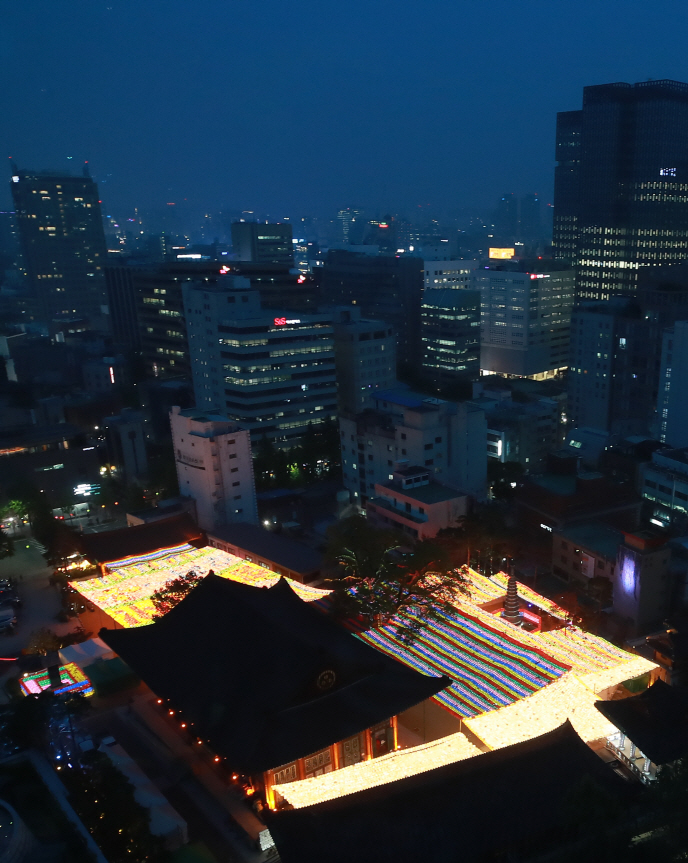 Lotus lanterns are lit at Jogyesa Temple in downtown Seoul on May 14, 2018, ahead of Buddha’s birthday. (Yonhap)