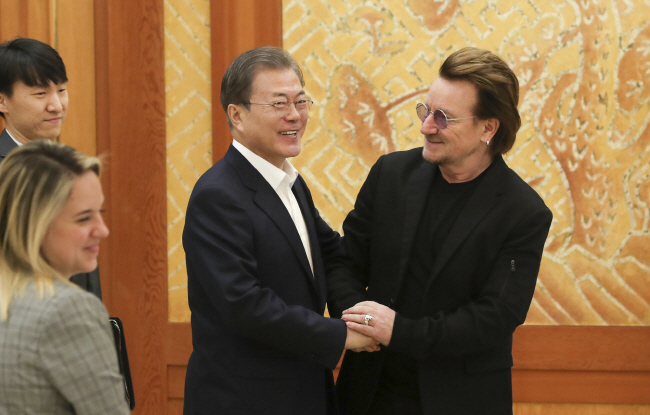 SEOUL, April 13 (Korea Bizwire) — Bono, the lead vocalist of Irish rock band U2, has sent a letter to South Korean President Moon Jae-in asking for support in his country’s fight against the novel coronavirus, the presidential office here said Sunday.

In the letter, Bono asked for South Korean protective equipment and diagnostic kits and said he would personally pay for it, according to Cheong Wa Dae.

In a reply sent Friday, President Moon said he would have the health authorities discuss the issue and he hoped Ireland will overcome the crisis, the presidential office added.

President Moon and Bono met in December last year, when U2 had its first solo concert in South Korea as part of its Joshua Tree Tour.

The 59-year old Irish musician is one of the world’s best-known philanthropic performers, spearheading human rights movements across the globe.

Ireland had reported nearly 9,000 virus infections as of Sunday afternoon (Korean time), with 320 deaths, according to data compiled by Johns Hopkins University.