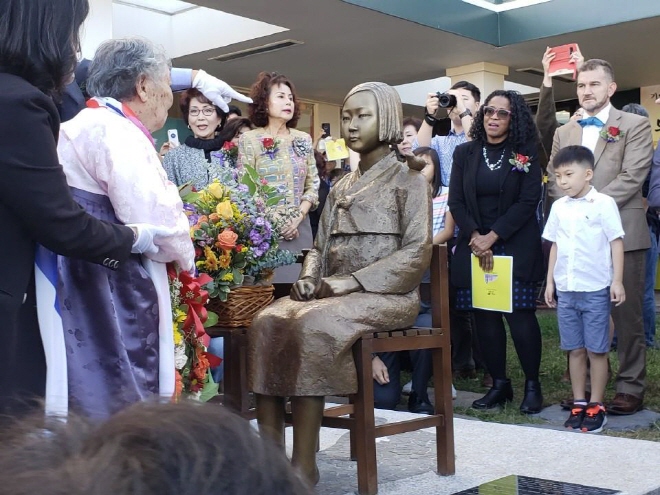 A ceremony is underway to mark the unveiling of a statue of a girl symbolizing Korean victims of Japan’s wartime sexual enslavement in Annandale, Virginia, on Oct. 27, 2019. (Yonhap)

WASHINGTON, Oct. 27 (Korea Bizwire) — A statue symbolizing Korean victims of Japan’s wartime sexual slavery finally got ensconced in Virginia on Sunday, after being stored in a warehouse for three years due to Tokyo’s alleged efforts against its installation.

A civic group pushing to erect the statue of a young girl commemorating the former sex slaves, better known as comfort women, held a ceremony unveiling the monument in Annandale.

It was the fifth such statue to be installed in the United States.

The statue was first shown to the public during a welcoming event on the National Mall in Washington in December 2016.

But until a South Korean landlord offered the space in Annandale recently, it had to be stored in a temporary place.

Attending the ceremony were activists in support of the victims as well as officials from the Virginia state government and South Korean residents in the state.

Also among the participants was Gil Won-ok, a 93-year-old surviving victim.

“The statue of the girl now found a home three years after its arrival here,” the group said in a statement.

“We will keep it as a symbol of efforts to demand Japan’s appropriate apology and compensation and as a scene of education for peace and human rights.”

South Korea and Japan reached a landmark deal in December 2015 to address the comfort women issue and established a Tokyo-funded foundation to support them.

But the foundation was later disbanded amid criticism that the 2015 deal was signed without sufficiently consulting victims and a sincere apology from Japan.

Historians estimate that up to 200,000 women, mostly from Korea, were forced to work in front-line brothels for Japanese troops during World War II.