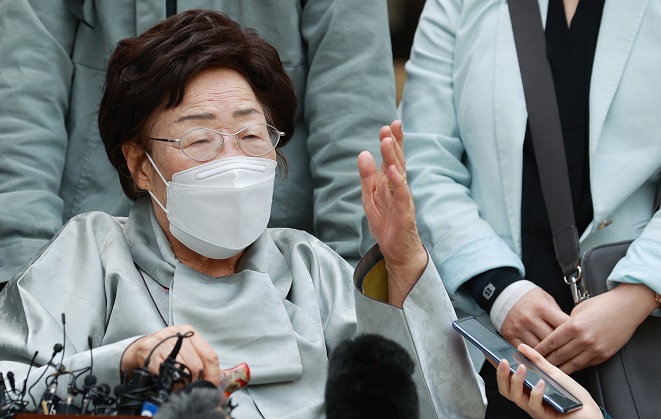 Lee Yong-soo, one of the 15 registered surviving South Korean victims of sexual slavery by Japan during World War II, talks to reporters after a ruling that dismissed the compensation lawsuit against the Japanese government outside the Seoul Central District Court on April 21, 2021. (Yonhap)

The Seoul Central District Court dismissed the case brought by 20 plaintiffs, including surviving victims forced to work in front-line brothels for Japanese soldiers during World War II, citing sovereign immunity, a legal doctrine that allows a state to be immune from a civil suit in foreign courts.

“When we recognize exemptions of sovereign immunity, diplomatic clashes will inevitably ensue,” the court said. It also cited a few examples of court cases after World War II that were rejected for deliberations based on sovereign immunity.

It also took note of the 2015 bilateral agreement between Seoul and Tokyo to resolve the dispute.

Despite some procedural problems, the agreement was reached after listening to opinions of the victims, euphemistically called “comfort women,” and some of them have received money from the foundation set up under the deal, the court said.

The victims and activists have called the agreement inadequate, saying it lacks a sincere apology from Tokyo and left out their voices in the negotiation process.

“Victims suffered tremendously, and the efforts and results by the South Korean governments seem to have been not enough to help them recover from their sufferings,” the court said, adding the issue should be resolved through “diplomatic” efforts.

The plaintiffs filed the lawsuit in December 2016. But the legal proceedings had been delayed because Tokyo refused to respond.

Lee Yong-soo, one of the plaintiffs, expressed dismay and frustration over the ruling.

Sitting in a wheelchair, the 92-year-old survivor of sexual enslavement urged the government to “take the issue to the International Court of Justice regardless of whether it produces a good or bad outcome.”

In recent months, she has mounted calls to bring the matter to the international court as a last resort to solve it permanently.

Before getting on a taxi to leave the court, Lee said in tears, “I’ve been working for all of the victims, not only for me. I hope you do know that.”

In January, a court here ordered Japan to make financial reparations of 100 million won (US$91,300) each to the first group of 12 victims, in the first legal victory for South Korean victims of wartime sexual enslavement.

At that time, it rejected Japan’s claim that the case should be dropped based on sovereign immunity, and said that the rule should not apply to “systematic crimes against humanity” and war crimes.

Tokyo has maintained that it had no obligation to follow the ruling by a South Korean court that it said had no jurisdiction over Japan. 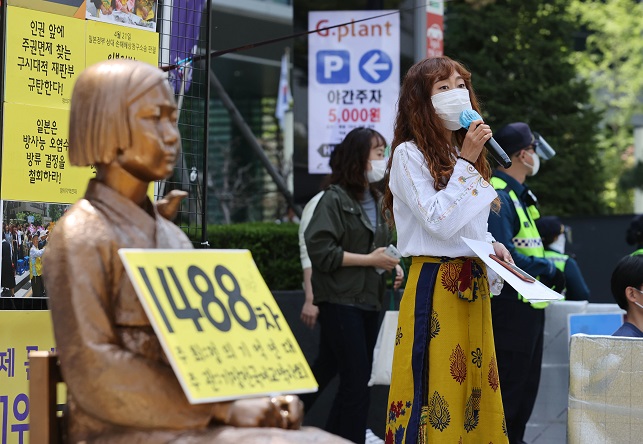 A representative from a weekly Wednesday rally advocating sexual slavery victims speaks to reporters in front of the Japanese Embassy building in Seoul on April 21, 2021. (Yonhap)

During a press conference, the Korean Council for Justice and Remembrance for the Issues of Military Sexual Slavery by Japan, a Seoul-based advocacy group for the victims, denounced the Wednesday ruling as “shameful.”

The group said it was “hard to understand” that the court allowed Japan sovereign immunity and that the ruling ran counter to the decision in December 2019 by the Constitutional Court that the 2015 agreement was “political” and thus not legally binding.

“More than anything, the court failed to offer words of comfort for the victims to help them recover their dignity as human beings throughout the one-hour hearing, although Lee Yong-soo made an appearance herself” the group said.

“It put priority on national interest over victims’ rights …. History will remember the ruling as a shameful one,” the group said, adding it will discuss with the victims whether they will appeal the ruling and “do everything” it can to bring justice.

In South Korea, there are only 15 surviving victims registered with the government, mostly in their 80s and 90s. According to historians, there were around 200,000 victims, mostly from Korea.

Relations between the two neighboring nations have hit their lowest levels in recent years over a series of sensitive issues, from wartime forced labor to Tokyo’s recent decision to release wastewater from the destroyed Fukushima nuclear plant into the sea.

South Korea’s foreign ministry said it was “grasping the details of today’s ruling” and refrained from commenting on it.

“Yet, in line with our principle of the victim-centered approach, our government will do the utmost to restore and honor the dignity of the victims of sexual slavery by the Japanese military,” it said.

It also urged Japan to act consistent with “the remorseful spirit shown in the 1993 Kono statement and the 2015 agreement,” referring to a statement issued by Japan’s then-Chief Cabinet Secretary Yohei Kono acknowledging Japan’s operation of a wartime sexual slavery system for the first time.