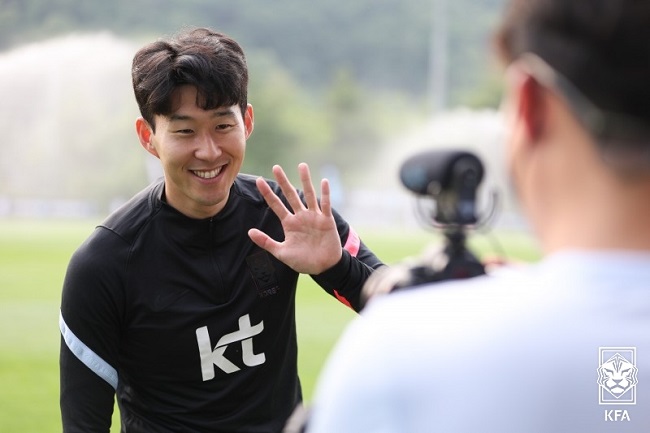 Son Heung-min of the South Korean men’s national football team waves at a camera held by a team official at the National Football Center in Paju, Gyeonggi Province, on May 31, 2021, in this photo provided by the Korea Football Association.

The Korea Minting, Security Printing & ID Card Operating Corp. (KOMSCO) said it plans to release the medals themed on the 28-year-old striker for Tottenham Hotspur in two designs — coin and paper money — in July. It did not elaborate on the exact date of the release.

The medals will each be sold with a warranty certificate holding serial numbers, which KOMSCO said will add value and credibility to the products.

Portions of the proceeds from the sales will go toward developing the Korean youth football community according to Son’s wishes, according to KOMSCO.

“Son Heung-min’s performance (in the Premier League) has given pride and confidence to South Koreans going through difficult times amid the new coronavirus pandemic,” KOMSCO CEO Bahn Jahng-shick said, adding that the agency launched the project to honor Son for enhancing the country’s prestige across the world.

Since making his professional debut in the German Bundesliga in 2010, Son has developed into one of the finest players ever to come out of South Korea.

Son is the country’s all-time leading scorer in European club football with 157 goals and counting. He enjoyed his most successful Premier League season in 2020-2021, netting a career-high 17 goals in 37 matches.

Son, captain of the national team, is tied with Park Ji-sung and Ahn Jung-hwan, a pair of 2002 FIFA World Cup heroes, for most World Cup goals with three.

The creation of the commemorative medals is one of KOMSCO’s many projects to boost South Korea’s national brand value.