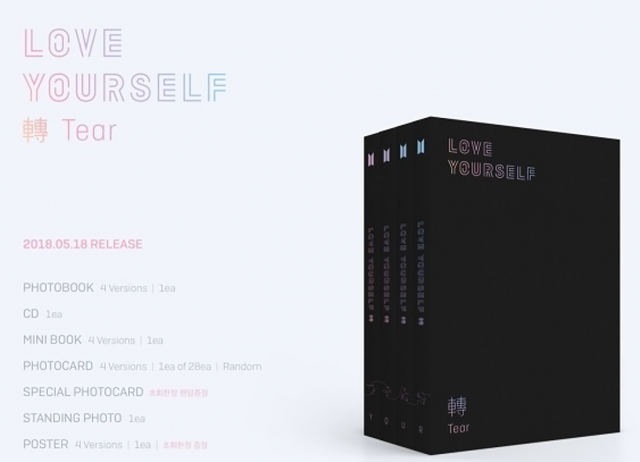 Gmarket Global said that 20 percent of BTS’s third album “Love Yourself: Tear” sold in 54 countries between April 18 and May 27, went to Taiwanese fans. (image: Gmarket Global)

SEOUL, May 30 (Korea Bizwire) — BTS has developed into a worldwide sensation after topping the Billboard 200 Chart, and companies are rushing in to take full commercial advantage of the Korean boyband’s success.

International fans of BTS have been visiting domestic online shopping platforms while concerts showcasing the K-pop stars have been selling out instantly.

The online platform says that 20 percent of BTS’s third album release, “Love Yourself: Tear” sold in 54 countries between April 18 and May 27, went to Taiwanese fans.

The second largest bulk sales went to fans in China at 11 percent, followed by Malaysia (also 11 percent), and Thailand (8 percent).

A large chunk of sales went to consumers in Southeast Asia, accounting for 30 percent of total sales.

Gmarket Global says that many consumers from Saudi Arabia, France, and Germany have also sought out its platform in search of the album, unable to source it locally.

In addition, products building upon the band’s popularity are also selling fast.

BTS Mediheal facial masks have seen a surge in sales, while products by Puma via its collaboration with BTS are very popular in Taiwan and Hong Kong.

“As Gmarket Global has made it easier for foreign fans to buy the album, sales hare surged exponentially,” said Moon Ji-young, a manager at eBay Korea.

Lotte Duty Free announced that most of the 40,000 tickets to an upcoming BTS concert it is hosting next month at the Seoul Sports Complex have been sold.

Concert organizers had already increased seats by 30 percent in anticipation of the rise in the band’s popularity.