“Our team has a lot of young and inexperienced players.It’s important for us to play with composure before 80,000 fans. I think the pressure will be the biggest factor. “But if we can control it, we should be able to win.”

“In terms of tactics and lineup, Australia will be a different team. We’ve won every match so far without conceding a goal. Our players will take the field with confidence.” 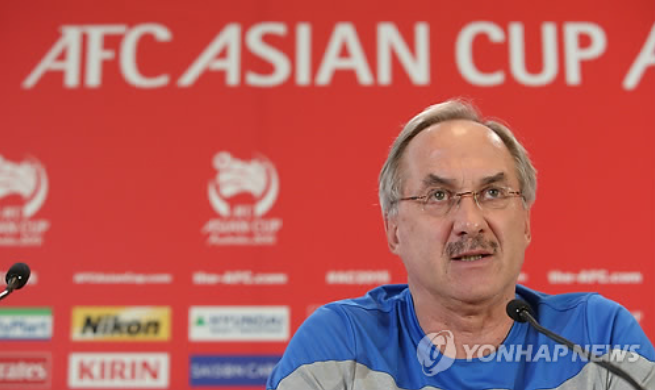 SYDNEY, Jan. 30 (Korea Bizwire) – With his South Korean team set to take on host Australia in the AFC Asian Cup final on the weekend, coach Uli Stielike said Friday that composure will be the key to success.

“Our team has a lot of young and inexperienced players,” Stielike said at the pre-match press conference on the eve of the final at Stadium Australia. “It’s important for us to play with composure before 80,000 fans.”

The kickoff between the 69th-ranked South Korea and the 100th-ranked Australia will be at 8 p.m. on Saturday local time, or 6 p.m. in Seoul. Though South Korea defeated Australia 1-0 on Jan. 17 in group play, Stielike predicted “a difficult” match because Australia won’t rest some of its best players as it did two weeks ago.

“In terms of tactics and lineup, Australia will be a different team,” he said. “We’ve won every match so far without conceding a goal. Our players will take the field with confidence.”

The AFC said the final will be played before a sellout crowd of some 80,000 at Stadium Australia. The stadium can hold 84,000 fans but it will not be full to capacity for the final owing to some restrictions for the competition.

South Korea has also enjoyed a large following so far and will likely draw around 10,000 fans on Saturday.

Stielike said both teams should try to engage in a memorable match for the fans in the stands, adding that it’s important for his youthful players to deal with the pressure of trying to end South Korea’s 55-year title drought at the Asian Cup.

“I think the pressure will be the biggest factor,” he added. “But if we can control it, we should be able to win.”

Midfielder Ki Sung-yueng, Stielike’s captain, said it was an “honor” to play in the final.

“We know all about Australia, having already played them in the group stage,” he said. “We will let our play do all the talking. I am pleased to face Australia, one of the best teams in Asia, in the final.”

Ki said he has told his teammates they should capitalize on “this opportunity of a lifetime.”

“We want to prove at this tournament that we’re the champions (of Asia),” he added. “There are people who felt that we couldn’t reach the final because of injuries. Our attitude will be that we have nothing to lose.”

South Korea has yet to concede a goal in five matches, and Ki said it had more to do with the players’ collective efforts than luck.

“It gives the whole team a great deal of confidence to keep the opponents off the board,” the captain said. “Maybe luck worked in our favor when opposing players couldn’t take advantage of good chances to score. But we’ve been able to come this far because we were all determined not to let in a goal.”

“I think the reason they are in the final is because collectively, they have been more consistent than other teams,” he said. “Yes, they have individual threats and Son is certainly one of them. But we’ve never been ones to focus on individuals; if you do you fall into the trap of disrespecting other players on that team.”

“We’ll just do what we’ve been doing,” he said. “It’s been successful so far and we’ll continue to do that. There won’t be any secrets about how we go about it tomorrow (Saturday). We’ll take the game to the opposition, we’ll put pressure on them and it’s up to them to stop us from creating opportunities and scoring goals. Nothing’s going to change from that perspective.”