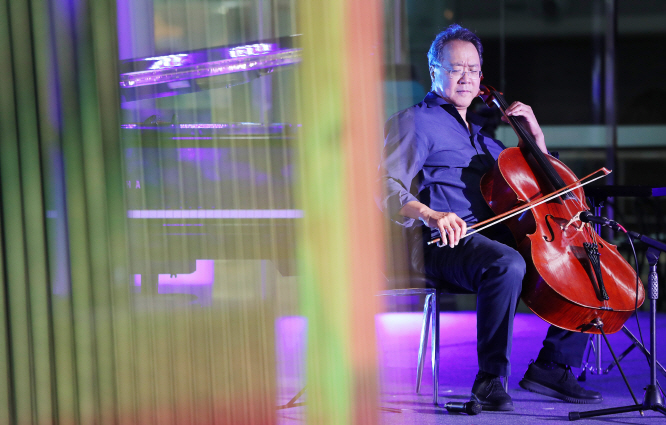 Cellist Yo-Yo Ma performing during the DMZ Peace Concert at Dorasan Station, just south of the DMZ, on Sept. 9, 2019. (Yonhap)

SEOUL/PAJU, Sept. 9 (Korea Bizwire) — A medley of Korean and Western classical and contemporary music brought a symbolic train station at the inter-Korean border to life Monday as South Korea held a live concert to celebrate the first anniversary of the last inter-Korean summit.

The DMZ Peace Concert, the first of its kind, brought together musicians from many different genres to Dorasan Station, just south of the heavily fortified Demilitarized Zone (DMZ) bisecting the two Koreas, for a joint performance.

“I have a dream, a dream of performing at the border between South and North Korea,” Yo-Yo Ma told the audience, adding that his dream came true today.

The cellist said culture builds trust and a bridge between people and that being together can make what is impossible possible before performing “Longing for Mount Kumgang,” a widely loved Korean song carrying Koreans’ wish for reunification with North Korea.

The culture ministry organized the event to mark the first anniversary of the third summit between South Korean President Moon Jae-in and North Korean leader Kim Jong-un on Sept. 19 last year and to promote the DMZ’s ongoing change into a symbol of peace.

At the end of the summit in Pyongyang, the two leaders signed the Pyongyang Declaration in recognition of their joint determination to end military hostility across the border and boost cooperation.

The stage then was taken by pianist Kim Cheol-woong, a North Korean who defected to South Korea in 2002 while he was the youngest principal pianist at North Korea’s State Symphony Orchestra.

“There are not many songs that South and North Korean people could sing together. I hope I could visit my hometown, and I also long for the day that you could travel to Pyongyang,” he said of the reason for selecting the two piano numbers. 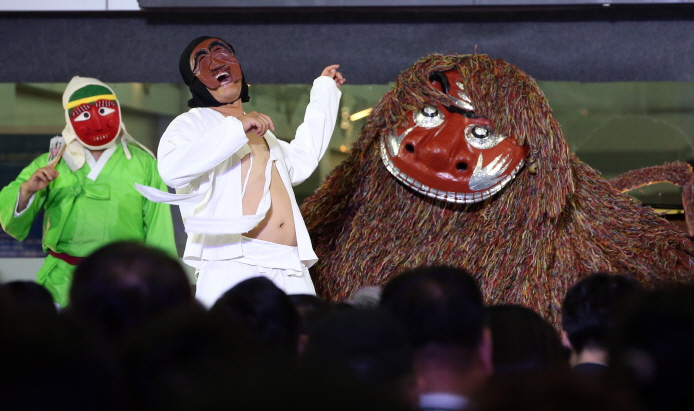 The DMZ Peace Concert held at Dorasan Station, just south of the DMZ, on Sept. 9, 2019. (image: Ministry of Culture, Sports and Tourism)

Indie female duo Rooftop Moonlight added a touch of youth to the concert with their uplifting K-pop songs as well as a children’s song from the era before the division of the two Koreas.

The show’s finale brought together Yo-Yo Ma; Ahn Sook-sun, master singer of the Korean traditional solo opera “pansori”; and prominent Korean traditional drummer and performer Kim Deok-su, as well as classical pianist Lim Dong-chang, whose joint performance of “Arirang” won a solid round of applause from the audience.

“I was lucky to be able to cross the DMZ by foot to perform in Pyongyang in 1990. As I was driving from Seoul up here, I wished I could keep driving to Pyongayng,” Kim told the impressed audience.

A ceremony to wish for peace between the two Koreas wrapped up the two-hour concert, with the spectators invited to tie ribbons together in front of the stage.

The concert was attended by South Korean ministers of culture, unification and foreign affairs and British Ambassador to South Korea Simon Smith.

Also among those invited were North Korean defectors, Korean War veterans, South Korean and American soldiers stationed near the border and South Korean civilians whose hometowns are in the North.