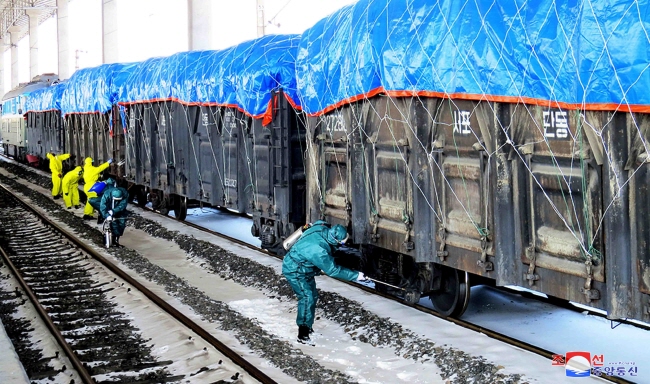 This is one of several photos that the Korean Central News Agency released on March 4, 2020, to show North Korea’s ongoing efforts to prevent the spread of the new coronavirus. (Yonhap)

SEOUL, March 29 (Korea Bizwire) — North Korea has been mobilizing elite research centers to come up with scientific measures to prevent an outbreak of the coronavirus and other infectious diseases, the country’s main newspaper said Sunday.

North Korea has not reported any case of COVID-19 virus infection, but it has called for nationwide efforts to prevent the virus from breaking out on its soil through intensified border controls and a tightened quarantine process.

Researchers from the bioengineering and agriculture branch at the State Academy of Sciences have been dispatched to each district in over 10 provinces to test for COVID-19 infections, the official Rodong Sinmun said.

The report also said technical guidelines on testing for the virus have been distributed across the country.

Scientists at the Kim Il-sung University, the North’s top university, are conducting research on the cause of the mass death of animals in South Hwanghae Province and Kangwon Province, according to the report.

Since the outbreak of the African swine fever (ASF) on the Korean Peninsula last year, North Korea has taken measures to prevent the spread of ASF and other animal-related diseases.

Such efforts appear to reflect the country’s concerns that an outbreak of infectious disease in domestic animals may further strain the country as efforts against the COVID-19 virus are expected to protract longer.

Concerns are lingering that North Korea could be more vulnerable to the COVID-19 virus as it shares a long and porous border with China and lacks key medical supplies and infrastructure to test and treat infected people.

Earlier, organizations, including the World Health Organization, Doctors Without Borders and the International Red Cross (IFRC), have received sanctions waivers to deliver medical devices, testing kits and other supplies to the North.