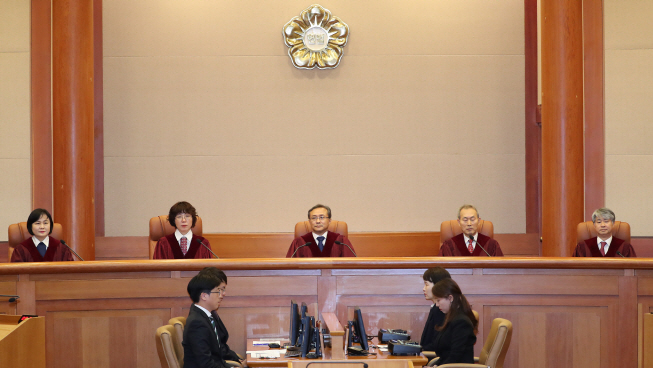 Constitutional Court Chief Justice Yoo Nam-seok (C) and other judges sit for a ruling on the constitutionality of a Seoul-Tokyo deal on wartime sexual slavery of Korean women, at the court in Seoul on Dec. 27, 2019. (Yonhap)

SEOUL, Dec. 27 (Korea Bizwire) — South Korea’s Constitutional Court on Friday rejected a petition by Korean victims of Japan’s wartime sex slavery against the government’s 2015 deal with Japan on the issue, saying that the matter is not subject to its formal review.

The nine-justice panel made the unanimous decision in response to a 2016 petition filed by 29 victims and 12 family members of surviving and deceased “comfort women.”

The court said the agreement is a “political” one, which means it is not legally binding.

“Various assessments of the deal are in the realm of politics as it is the judgment of diplomatic policy to seek the solution of the history issue and continue cooperation between the two nations,” it said.

The court said the deal does not affect victims’ legal status, indicating that it won’t influence their right to seek compensation.

In December 2015, the government of then President Park Geun-hye reached an agreement with Japan to “finally and irreversibly” resolve the issue of Korean victims forced to serve as sex slaves for Japanese troops during World War II.

The deal calls for the establishment of a foundation dedicated to supporting surviving victims. Tokyo contributed 1 billion yen (US$9.1 million) to the foundation.

The claimants said the deal violates the basic rights of comfort women who want Japan to take legal responsibility for the atrocities.

Seoul’s foreign ministry said the deal, which is not a state-to-state treaty, is not subject to a formal review by the Constitutional Court. In June 2018, the government asked the court to turn down the petition.

The liberal Moon Jae-in government dismissed the deal as “seriously flawed” and disbanded the foundation in July. Tokyo has protested that move, saying it’s a breach of the agreement. 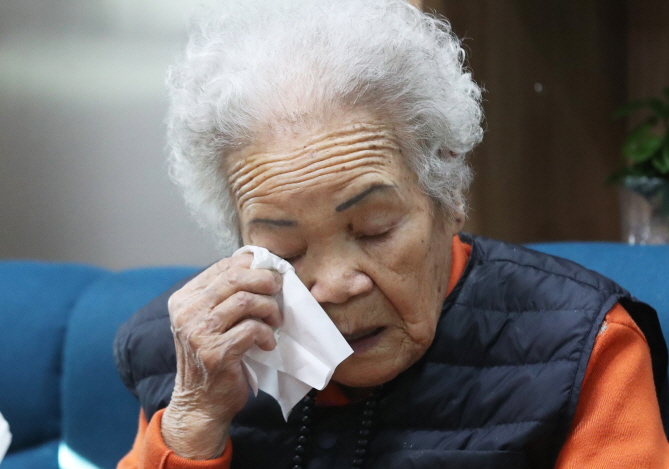 Former comfort woman Lee Ok-sun wipes her eyes at a shelter in Gwangju, southeast of Seoul, on Dec. 27, 2019, while watching a TV broadcast of the Constitutional Court’s ruling that a Seoul-Tokyo deal on wartime sexual slavery of Korean women is not subject to its formal review. (Yonhap)

The court’s hearing has gained intense attention due to its potential impact on diplomatic ties between the neighboring countries.

Following the court decision, the Seoul government reiterated its commitment to supporting the victims.

“The government respects the Constitutional Court’s decision,” the foreign ministry said in a text message sent to reporters.

“It will continue possible efforts to restore the honor and dignity of the victims and heal their psychological scars.”

The victims expressed disappointment at the court decision, calling for Japan’s sincere apology and compensation over its atrocities.

“(The 2015 deal) is a wrong agreement. I am baffled and disappointed by the court decision,” said the 92-year-old Lee Ok-sun, who joined the petition.

Historians estimate that up to 200,000 women, mostly from Korea, were forced to work in front-line brothels for Japanese troops during the war. There are only 20 Korean survivors registered with the government.

Friday’s decision is the second adjudication by the court over the issue of Japan’s sex slavery.

In 2011, the Constitutional Court said that it is unconstitutional for the Seoul government to make no specific effort to settle the issue with Tokyo.

Separately, the Seoul High Court ordered the government Thursday to seek a compulsory settlement with victims in a damages suit filed by nine comfort women.

The court said the government needs to “humbly” acknowledge the fact that the victims suffered emotional pain due to the 2015 deal that was clinched without consulting them.