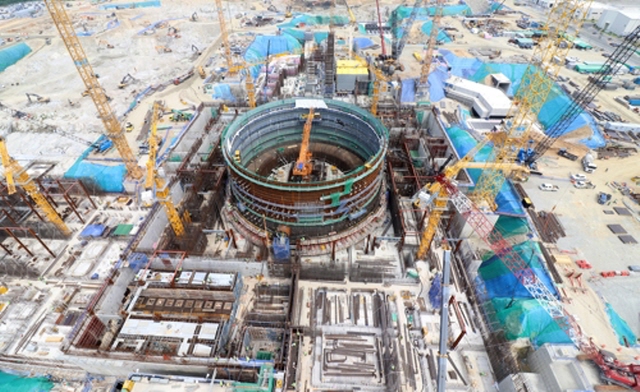 SEOUL, Jan. 23 (Korea Bizwire) — The construction of the new nuclear reactors under progress in the country is expected to be further delayed as South Korea moves forward with the implementation of a revised labor law that limits the maximum weekly working hours to 52, industry sources said Wednesday.

According to a statement from the Ministry of Trade, Industry and Energy, the construction of the Shin Kori-5 and Shin Kori-6 reactors are anticipated to be finished in June 2024, which marks a delay from the original plan of October 2022.

The ministry attributed the delay to the building suspension in 2017, along with the changing labor environment, including new working hour policy that has gone into effect.

The construction of the two new reactors in the southeastern city of Ulsan was earlier suspended for three months from July to October to gauge public opinions, eventually to resume the project at the recommendation of a civilian panel.

The Korea Hydro & Nuclear Power Corp. (KHNP) in July 2017 said 28 percent of the construction had been completed since the groundbreaking in 2014.

“We cannot add more workers as the maximum number of employees is already stationed in the limited space at the construction site,” the KHNP said. Workers previously worked 68 hours a week.

The ministry also extended the completion date of the Shin Hanul 1 and 2 units by 11 months to September 2020. The construction began in April 2010.

The delay for the Shin Hanul reactors came as the ministry carried out earthquake shake tests, it added.