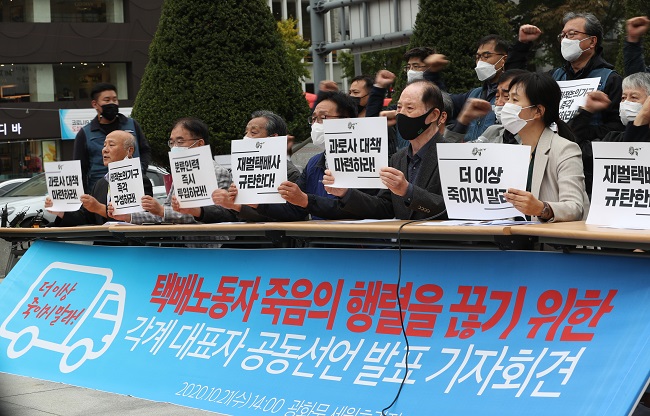 Activists hold a press conference on Seoul’s Gwanghwamun Square on Oct. 21, 2020, to demand the creation of a new deliberative body to address couriers’ deaths. (Yonhap)

SEOUL, Oct. 26 (Korea Bizwire) — Following the recent deaths of several deliverymen and media reports on how they worked in a poor, extreme environment, more people are calling on delivery businesses to rein in excessive efforts to come up with ‘faster’ delivery services.

Some consumers even vowed on social media to boycott early morning delivery services that deliver parcels by early morning if the order is made before the clock strikes midnight the day prior.

“Businesses engage in excessive, unnecessary competition to deliver stuff that you don’t really need right now. Even as late as 10 p.m., the deliverymen send photos to customers of parcels being delivered,” said a 31-year-old office worker surnamed Choi.

“We had no problem in the past when deliveries used to be slower. Now, it seems like the new norm has emerged where people nearly kill themselves for faster delivery. I don’t use it anymore,” said a 38-year-old office housewife surnamed Shim.

Some argue that the sense of guilt for the burden of deliverymen is falling upon consumers, while businesses are the ones pushing them towards the cliff.

“It’s not about consumers rethinking the issue,” said Lim Sang-hyeok, head of Wonjin Green Hospital. “It’s about the businesses that come up with these services and the government that condones them.”

Some call on the need to impose restrictions on delivery services since the loss caused by health problems among deliverymen is a responsibility of society, not the individual, even if the deliverymen deliberately choose to work overnight to make more money.

“All states ban child labor because it involves exploiting society’s future resources for immediate benefits,” said Park Jong-shik, a researcher at the Changwon National University Institute of Social Sciences. “That same logic can apply to night labor as well.”