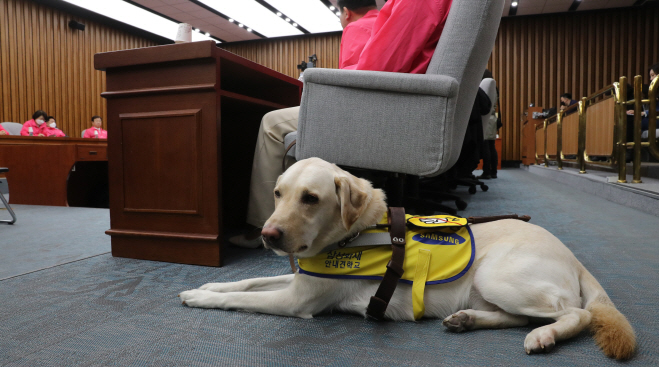 SEOUL, Dec. 7 (Korea Bizwire) — Lotte Mart, the hypermarket chain operated by South Korean retail giant Lotte, is under fire after one of its stores denied entry of a guide dog undergoing training.

An Instagram post on Nov. 29 documented an incident in which a Lotte Mart employee prevented a guide dog and its ‘puppy walker’ from entering.

A puppy walker is a volunteer that looks after a guide dog for at least one year to help with its social skills.

Criticism began to pour in against the shopping mall chain as guide dogs are legally permitted to enter all populated facilities.

When the crisis hit a new low following calls for a boycott movement, Lotte Mart posted a letter of apology on its official social media accounts and displayed notices at all its outlets that guide dogs were welcome to enter.

Experts argue that training for future guide dogs needs better promotion, since it is a critical period for dogs to learn what it takes to guide the blind.

“It’s the same as how we look at children,” said Prof. Kim Ho-yeon from Gangnam University.

“A volunteer, selected by the guide dog school, is charged with the task of bringing a young, potential guide dog to markets, malls, banks, schools and other locations to help raise the dog’s social skills and capability to adjust in various everyday environments.”

This, however, is not the first time that guide dogs have been denied entry to a public place.

Last April, another controversy broke out at the National Assembly when a guide dog for Rep. Kim Ye-ji of the main opposition People Power Party was denied entry to the main conference hall.

Experts blame a sense of indifference and lack of public awareness towards the blind and the guide dogs.

“Asking the blind to leave their guide dogs behind is the same as asking people who can see to walk with their eyes closed,” Prof. Kim said.