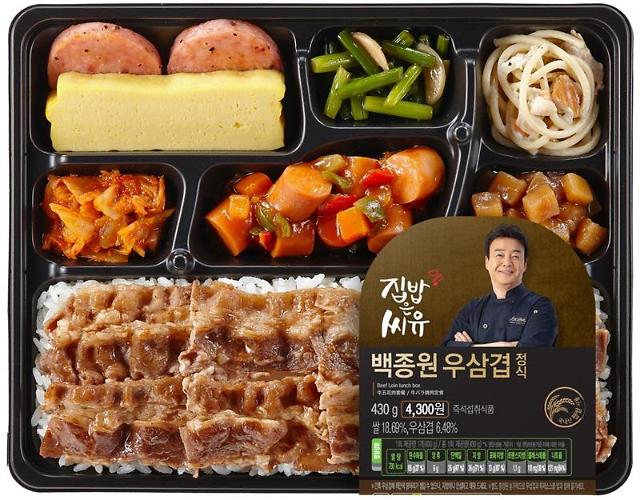 Lunch meals sold at conveniences stores come in a wide variety of options, including menus like ribs, pork cutlets, and bulgogi (grilled marinated beef), and at affordable prices, ranging between 3,000 won ($2.66) and 4,000 won. (image: CU)

Over the past 30 years, Korea’s rice consumption per capita has more than halved, dropping from 128.1kg in 1985 to 62.9kg in 2015, with Koreans adopting Westernized diets seeking alternatives like wheat or bread.

Amid the changing food culture, however, rice purchases by convenience stores are on a steep rise, driven by the recent popularity of convenience store lunch boxes, and other quick-bite snacks such as samgak gimbap (similar to Japanese onigiri), that use rice as a main ingredient.

According to convenience store franchise CU, its food manufacturing facilities purchased roughly 5,500 tons of rice in the first half of 2016, which was a 71.9 percent increase from H1 2015 (3,200t).

CU competitor 7-Eleven has seen a similar increase, with its H1 2016 figure standing at 5,400 tons, and officials are expecting this year’s figure to see an 80 percent increase from last year’s amount of 6,100 tons.

Together with GS25, the three convenience store enterprises will be accounting for more 30,000 tons of rice consumption in 2016.

“We’ll continue to develop new, high-quality convenience food that can live up to consumer expectations.”

Lunch meals sold at conveniences stores come in a wide variety of options, including menus like ribs, pork cutlets, and bulgogi (grilled marinated beef), and at affordable prices, ranging between 3,000 won ($2.66) and 4,000 won. And they have grown exceedingly popular over the past year with busy students and office employees seeking quicker and simpler, yet fulfilling lunch alternatives.

From January to August 2016, CU saw its sales of lunch boxes almost triple compared to the same period last year, while GS25 and 7-Eleven sales increased by factors of 2.76 and 2.54, respectively.