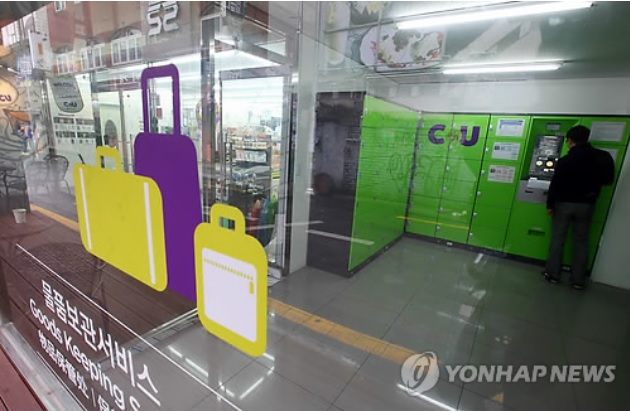 The private lockers can be rented for 2,000 to 3,000 won per three hour time block, depending on their size, and payment can be made in cash, with transit cards or through mobile payment services. (image: Yonhap)

SEOUL, Jan. 27 (Korea Bizwire) – Convenience stores usually sell simple items such as snacks, drinks and other daily necessities. Now, they are transforming themselves into private lockers, meeting rooms and concert halls providing a variety of “spaces.”

According to BGF Retail, the franchiser responsible for the CU convenience store chain, its CU Itaewon Freedom store began a private locker service last month as a strategic move targeting foreign tourists and club-goers in Itaewon, a famous tourist attraction in Seoul.

An official at BGF Retail said, “We introduced the service considering the inconvenience that foreign tourists coming to Itaewon feel due to a lack of place to put their bags safely. As they can lock their bags 24 hours a day, not only tourists but also young club-goers have responded positively to the service.”

The private lockers can be rented for 2,000 to 3,000 won per three hour time block, depending on their size, and payment can be made in cash, with transit cards or through mobile payment services. After the introduction of the service, the store has seen a 15 percent increase in the number of customers visiting.

As the service has proven to attract more new customers, the company plans to expand the private lockers, focusing primarily on stores crowded with foreign tourists.

In addition, CU convenience stores in university areas have started to offer meeting rooms equipped with tables, whiteboards, and HD TVs for those who seeks places for small-sized meetings. In the meeting rooms, customers can use a laptop for 1,000 won per hour, and can even copy, scan and print documents there.

As the meeting rooms are available anytime, even during exam periods, individuals wanting to use them should reserve in advance.

Meanwhile, the CU Marronnier Park store in Daehangno, Seoul, was equipped with a small-sized stage in front of the shop for amateur musicians in April last year, and even supplies sound and lighting equipment.

BGF Retail explained that the move was made to offer customers the pleasure of enjoying cultural performances highlighting the regional characteristics of the place, where lots of performers and audiences gather together.