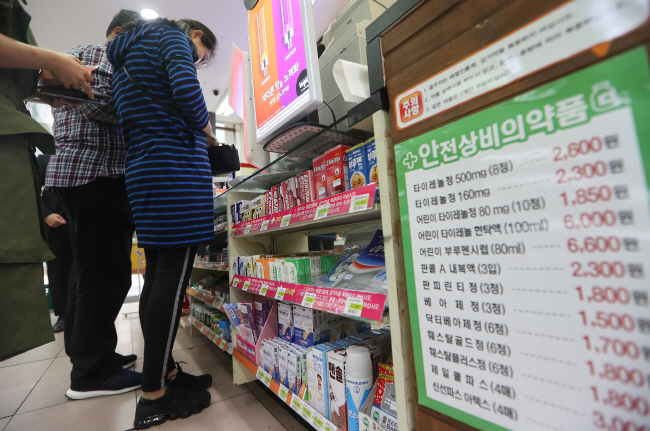 Industry insiders attribute the high sales volume of food and medicine sold at convenience stores to job seekers and workers who are unable to return to their hometowns to celebrate the holidays. (image: Yonhap)

SEOUL, Sept. 17 (Korea Bizwire) — Convenience stores situated in the nation’s leading industrial complexes were found to be playing the dual role of restaurant and drugstore during the nation’s major holidays, providing food and medicine to those unable to return to their hometowns.

The National Convenience Store Association announced today that the sales ratio for food products sold at convenience stores grew by more than 60 percent, on average, during the Lunar New Year and Chuseok holiday weekends compare to the immediate weeks before at the nation’s major industrial complexes in Pyeongtaek, Siheung, Gumi, Changwon and other cities.

The ratio is an indication of how certain products sell in relation to all products within the store.

During last year’s Chuseok holiday weekend, which was longer than usual, the sales ratio of lunch boxes, gimbap and instant noodles grew by 64.3 percent compared to the week before, while the ratio grew 56 percent during the Lunar New Year weekend this year.

Of note, sales of over-the-counter medication at convenience stores shot up by approximately 168 percent during the Chuseok holidays last year compared to the week before.

During the Lunar New Year weekend, growth was recorded at 114 percent.

Industry insiders attribute the high sales volume of food and medicine sold at convenience stores to job seekers and workers who are unable to return to their hometowns to celebrate the holidays.

As they seek out convenience stores for food and medicine, the ratio of these products naturally has risen, according to experts.

One source within the industry said that the growth reflects the nature of convenience stores as they are up and running 24 hours a day, 365 days a year.

“Because the number of people who will be visiting their hometowns during the upcoming Chuseok holiday weekend next week is expected to be lower this year, sales of food and medical products are likely to surge,” said the source.