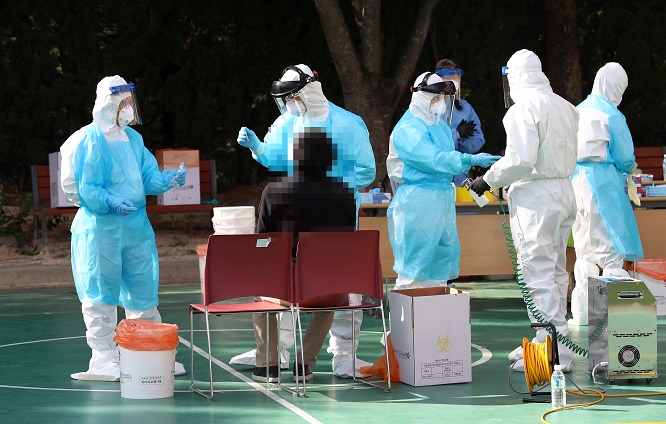 The total caseload rose to 24,548, according to the Korea Disease Control and Prevention Agency (KDCA).

Among the newly confirmed cases, there were 61 local infections and 11 from international arrivals, it said.

In particular, the KDCA said 23 new patients were confirmed in Seoul, 24 in Gyeonggi Province and eight in Incheon.

The public health agency reported two more coronavirus-related deaths, bringing the total to 430, while 55 additional patients have been released from treatment.

Despite the double-digit increase in daily virus cases, concerns linger due to the report of a group infection incident in Daejeon, 160 kilometers south of Seoul, which is linked with a family gathering during the five-day Chuseok holiday that ran through last Sunday.

Sporadic infections continued to be reported in miliary units.

In an Army unit based in Yangju, north of Seoul, four soldiers tested positive for the virus, according to military and local government officials. The number could increase as tests are being conducted on all of the some 300 other soldiers there.

On Friday, the number of coronavirus tests nationwide declined to 4,451 and the ratio of those having tested positive jumped to 1.62 percent from 0.47 percent the previous day.

The government plans to announce a decision Sunday on whether to adjust its social distancing guidelines, currently at Level 2.

Under the Level 2 scheme, South Koreans can maintain most of their daily routines, but outdoor gatherings of more than 100 people are banned. Sports events are allowed without spectators, and indoor meetings of 50 or more people are prohibited.

On Saturday, the number of new diagnosed cases in the greater Seoul area came to 55, above 50, which is the criterion for Level 1.

Health authorities said among lingering risk factors are the continued spread of the coronavirus in the greater Seoul area, home to about half of the nation’s 52-million population, door-to-door sales activities and cluster infections in high-risk facilities.

The Central Disease Control Headquarters also said the proportion of cases, of which origin has yet to be traced, is staying below 20 percent.

Out of 1,032 people diagnosed with the virus from Sept. 27 to Saturday, the infection routes of 196, or 19 percent, remain unconfirmed, it said in a separate press briefing.

It added Remdesivir, known as a coronavirus treatment, has been administered to 585 patients at 62 hospitals as of 4 p.m. Friday.