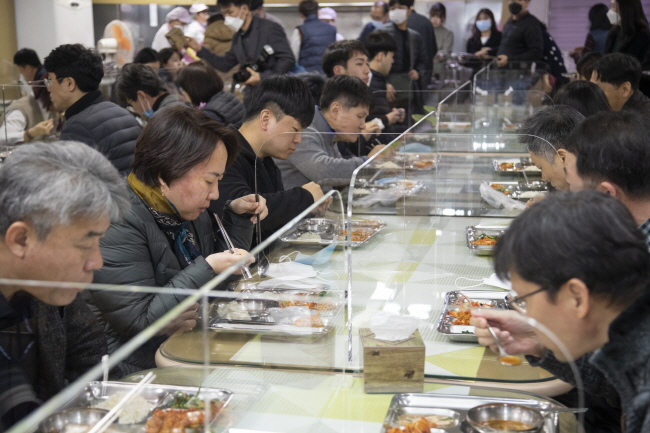 Acryl boards are set up on the table between diners at a cafeteria of the Iksan City Hall in the southwestern city of Iksan on March 9, 2020, as part of measures to prevent any possible COVID-19 infections between them. (Yonhap)

SEOUL, March 13 (Korea Bizwire) — With the outbreak of the novel coronavirus ongoing, it is being recommended that people eat meals while distancing themselves from others at work and at home.

In particular, social gatherings such as office get-togethers have all but disappeared.

Some office workers are welcoming the new trend, taking advantage of the opportunity to have a personal life after work.

Many companies and local governments are currently taking steps such as installing partitions in cafeterias as part of the coronavirus response. The measure is aimed at minimizing face-to-face contact during meals.

Some have guided their departments to eat meals at different times, even if no partitions have been installed, and some workers are being asked to spread out and eat in a single line.

An official from the Gangnam District Office in southern Seoul said, “We received guidelines to sit in a row while we are eating.”

Some corporate cafeterias are said to have become to reading rooms as partitions have been installed.

Citizens also agree that “isolating” oneself is inevitable while they eat.

While some think it is too much to install partitions, it seems to be one of the temporary measures to prevent possible COVID-19 infections.

Some argue that they want the new food culture to continue in the form of eating their own meals, even after the coronavirus outbreak is over.

Not only do workers not have office get-togethers, but they also want to eat on their own and spend their time as freely as possible.

Such voices seem to be gaining strength, especially among those who prefer an atmosphere that emphasizes individuality and flexibility rather than collective organizational culture.