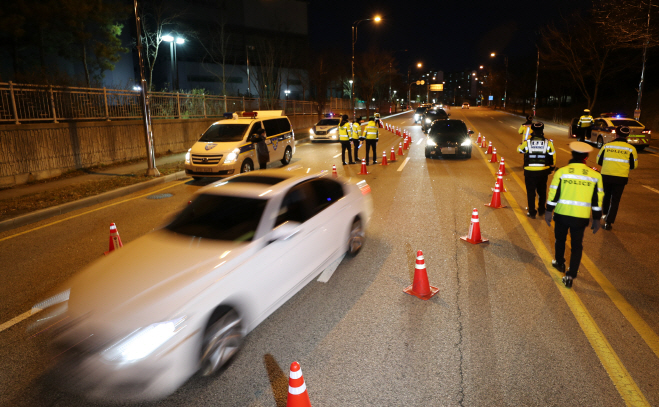 Police officers make cars drive through a curved path made of traffic cones as a method of cracking down on drunk drivers on a road in the southwestern city of Gwangju on March 16, 2020. (Yonhap)

SEOUL, March 18 (Korea Bizwire) — The number of drunk driving accidents is rapidly skyrocketing as the police have reduced drunk driving checkpoints in the wake of the spread of the novel coronavirus.

In response, a local police agency has introduced a new type of enforcement for drunk driving, similar to a “drive-through,” increasing the effectiveness of the measure.

Around 9:30 p.m. on Tuesday, 10 traffic police disembarked from patrol cars and a police van on a road in the city of Gwangju, 330 kilometers south of Seoul.

They laid out traffic cones to create a long “S” shaped passage.

The drivers, who saw the scene of a drunk driving checkpoint down a long hill, were taken aback, first stepping on the brakes.

Some drivers lowered the car windows, and asked the police, “Are you going to start drunk drinking checkpoints again?”

They were once again panicked when the police officer answered, “You just have to pass by” to the question, “Don’t we have to blow into an alcohol detector?”

Drivers who thought driving under the influence of alcohol (DUI) checkpoints had been suspended seemed surprised at the scene, as roadblocks have become increasingly rare in recent months. 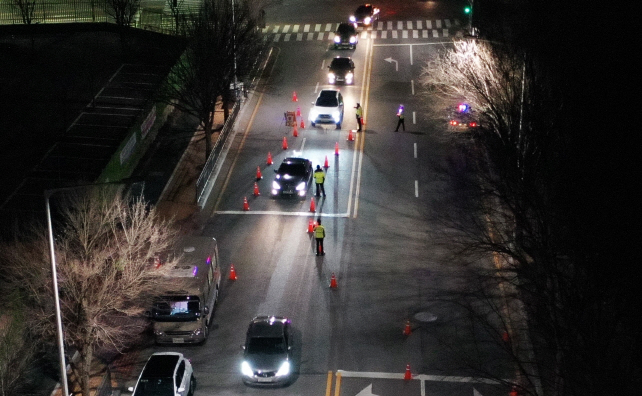 The method helps police officers catch intoxicated drivers while minimizing their contact with them amid the spread of the new coronavirus. (Yonhap)

The five police stations under the Gwangju Metropolitan Police Agency have been implementing a these types of enforcement methods since March 13.

A curved path is created on the road in one or two lanes with vehicles forced to pass by one by one under the watchful eye of law enforcement agents.

From the driver’s perspective, it is a “drive-through” crackdown, as the driver does not have to stop and lower the window, and blow into the alcohol detector.

A total of 62 cases of drinking accidents occurred in Gwangju in February when drunk driving checkpoints were suspended, more than double the 30 cases recorded in the same month last year.

The effects of the new enforcement have been immediate. Police have uncovered a total of 11 cases in the three days since its implementation, up from less than one per day before the new checkpoints were created.