A civic task force working for the rights of delivery workers holds a press conference in Seoul to urge shipping companies to offer measures to prevent overwork-related casualties and make good on their promise to beef up staffing in Seoul on Jan. 6, 2021. (Yonhap)

SEOUL, Jan. 6 (Korea Bizwire) – South Korea’s parcel delivery workers on Wednesday called on their companies to offer measures to prevent overwork-related casualties and keep a promise to beef up staffing.

A civic task force working for the rights of delivery workers, which was formed in July to improve working conditions for couriers, said delivery companies have yet to fulfill their pledge to hire additional hands to help with parcel sorting operations.

During a press conference in Seoul, the group argued major logistics firms — such as Hanjin Transportation Co., the logistics arm of Hanjin Group; Lotte Global Logistics Co.; and CJ Logistics Co. — have not made good on their promise to employ additional workers for parcel sorting.

Couriers have been complaining that parcel sorting activities take up too much of their workload and that they are often forced to finish deliveries late at night.

“In the runup to the Lunar New Year holiday, shipping volumes will surely increase, but work on measures to prevent overwork deaths of couriers is going nowhere,” it said.

Lunar New Year’s Day, which falls on Feb. 12 this year, is one of the country’s biggest traditional holidays along with Chuseok, the fall harvest holiday.

The holidays are occasions for family members and relatives to visit their hometowns and exchange gifts. 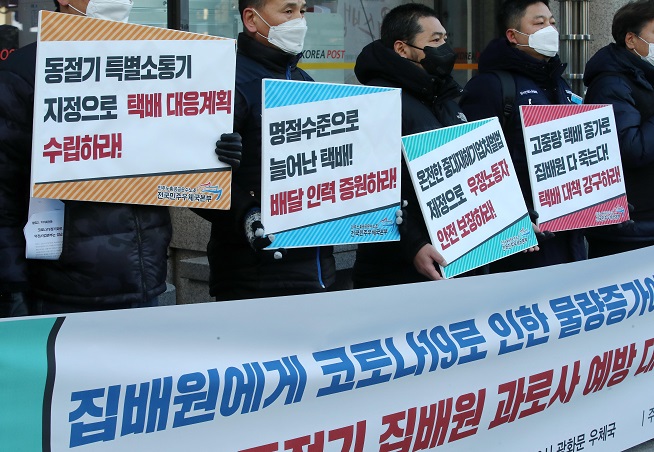 Warning of a walkout, the group criticized both the companies’ cancellation of agreements and the government’s “irresponsible” laissez-faire attitude toward the issue.

CJ Logistics, however, countered back, saying about 228 supporting employees are working at its 15 subterminals as of year-end, and among them, 100 workers have been newly hired since October, when the government and shipping companies announced a series of measures to improve the situation.

Heavy workloads often cause them to stay overnight, the workers complained, adding that the company focused only on cost-saving and did not pay enough attention to its employees’ poor working conditions.

Last year, 19 delivery workers died apparently due to overwork, according to the group, amid a surge in shipping volumes, as more people opted to order necessities and groceries online due to the coronavirus pandemic.