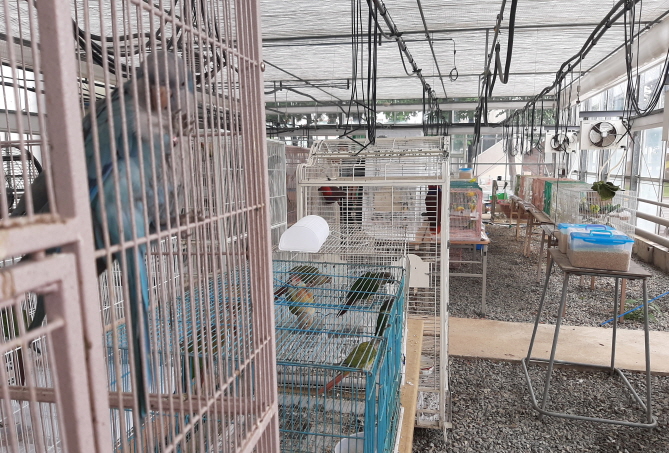 Animals saved from a fire last Sunday are recovering in a greenhouse at the county’s agricultural technology center. (image: Jangseong County Office)

Animals saved from a fire last Sunday are recovering in a greenhouse at the county’s agricultural technology center, according to local officials.

Opened in April of last year, “Jungle Zoo Love Banana,” is a unique experience center where visitors can see and touch exotic animals and plants, including parrots, animals, bananas and pineapple trees and other international endangered species.

However, about half of the 2,600-square-meter building burned down and about 2,500 birds and 30 reptiles were killed.

County officials were gathered at the scene on the day of the accident and focused on coming up with countermeasures as soon as firefighters put out the fire.

The surviving animals suffered from smoke inhalation, and county officials needed to take immediate action to treat the sick animals.

In a stroke of good luck in the midst of misfortune, about 20 endangered species, including Hyacinth Macau, with only 1,000 left worldwide, survived the inferno.

The rescue operation, which began around 6 o’clock in the morning, took more than 10 hours as officials removed surviving animals and plants out the damaged building, moved them to the agricultural technology center, and built a new habitat in the greenhouse.

Of the 12 species of land animals, including fennec foxes and 2,300 birds that survived, about half were exhausted and barely alive.

However, except for one parrot that eventually lost its life, all of the other animals are remarkably recovering.

The county plans to use the Parrot Experience Center at the Yellow Flower Festival by the Whangryong River, which opens in early October, as a new home for animals resting in a greenhouse at the agricultural technology center.

Unlike last year, when it was opened on a temporary basis, the Parrot Experience Center will not be torn down even after the festival is over.

Instead it will provide housing for animals until the completion of the reconstruction of the “Jungle Zoo Love Banana.”