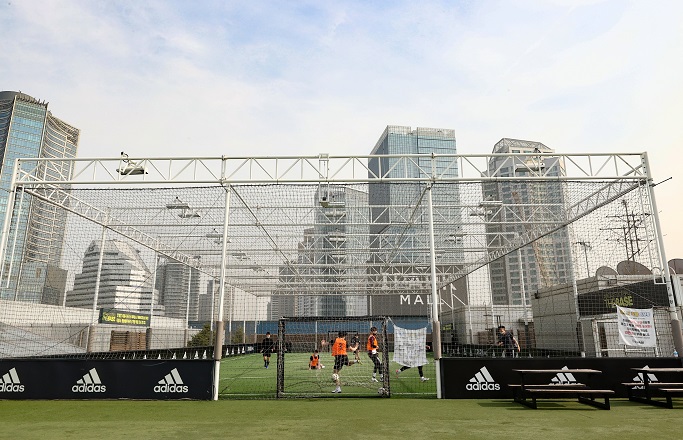 SEOUL, May 19 (Korea Bizwire) — Amid a decline in the number of customers visiting brick-and-mortar stores due to the rapid growth of the online market, South Korea’s major retailers are expanding rest and entertainment space as part of their survival strategy.

Lotte Mart’s Jamsil outlet in Seoul on Sunday opened a futsal court with a floor space of 1,300 square meters on the rooftop of the building.

The facility can be rented by citizens and hosts soccer classes on a bi-weekly basis. So far this year, the hypermart chain of Lotte has opened futsal courts at four outlets.

In recent days, the opening of sport-for-all facilities is booming among large discount stores. Such facilities have a great effect in attracting customers as the number of people enjoying soccer, table tennis and swimming is steadily growing.

Discount store chain Homeplus opened a 500-square-meter swimming pool for children at its Incheon Nonhyeon outlet in late 2021. It also runs futsal courts on the rooftops of 12 outlets.

When remodeling its Wolgye outlet in 2020, E-Mart Inc. greatly reduced the space of food and daily necessity shops that accounted for about 80 percent of the outlet’s total space.

Instead, it expanded various entertainment facilities, eating and drinking shops and cultural space.

When it remodeled its Mokdong outlet last year, it turned the entire seventh floor into an indoor garden.

Lotte Department Store’s Dongtan outlet, which opened last year, also has about half of its total floor area dedicated to rest and experience-type space, including the outdoor garden “The Terrace” on the third floor.