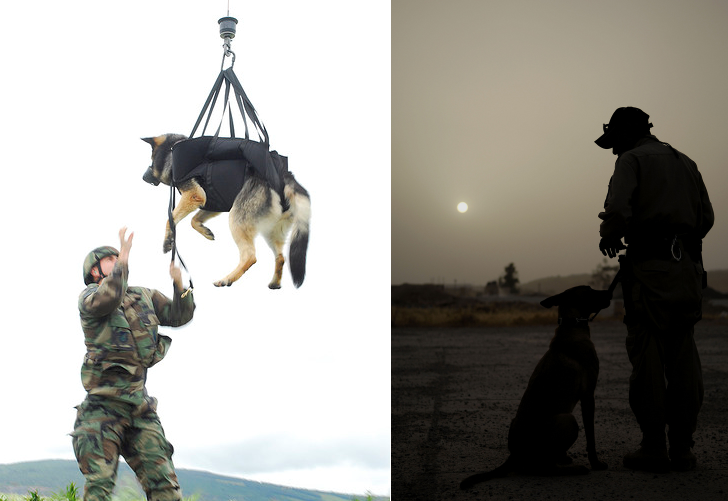 The administrative court in the Seoul Appeals Court said on August 8 that it overturned a lower court decision for a suit raised by a 24-year-old man who was discharged from the military service. (image:The U.S. Army(left)DVIDSHUB(right)/flickr)

SEOUL, Aug. 11 (Korea Bizwire) — Korea’s high court ruled in favor of the plaintiff who asked the government to acknowledge his degenerative back conditions due to handling military dogs that he may collect benefits as a person of national merit. The administrative court in the Seoul Appeals Court said on August 8 that it overturned a lower court decision for a suit raised by a 24-year-old man who was discharged from the military service.

Mr. Lee joined the Air Force in February 2010 and was assigned to the job of handling war dogs. His job involved a lot of heavy lifting such as carrying dog food bags. As he had to handle big dogs like the German Shepherd, he began feeling acute pains on his back about three months after beginning the job. The next year when he went to the military hospital, the doctor said it is symptoms of a herniated disk but doesn’t require a surgery.

Undeterred, he demanded the Ministry of Patriots & Veterans Affairs designate him as a person of national merit after being discharged from the service in September 2012. After the ministry refused his request, he brought the suit to the Seoul District Court.

The district court judge dismissed the lawsuit saying, “There is no evidence on how much the job of handling dogs affected his health conditions.” But the appeals court judges said in a statement, “It is not uncommon for military dog handlers to complain about back pains as dog training is physically exhausting. In particular, the handlers may have problem in their backs when the dog on a leash runs abruptly. The ruling is considered monumental as there has been no such precedence linking dog training with back problems.

Meanwhile, a Labrador trained to sniff out explosives in Britain was awarded the PDSA Dickin Medal, the animal equivalent of the Victoria Cross. The four-year-old Sasha was killed in 2008 in Afghanistan alongside her handler Lance Corporal Kenneth Rowe under Taliban attacks. It shows that there is a long way to go for Korea to reach the level of caring for and honoring humans’ best companion.