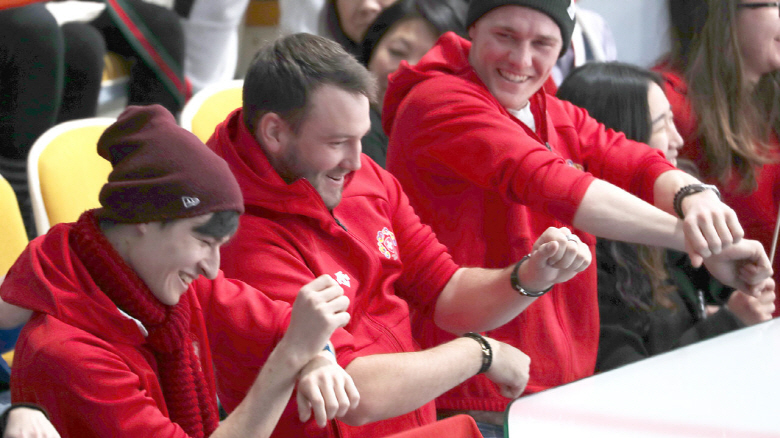 The crowd in the arena, which was in a somewhat tense mood between matches, instantly began to stir when the video for Psy’s global smash “Gangnam Style” was played on a large electronic display hanging from the stadium ceiling.

At the climax of the song, an athlete hilariously performing Psy’s “horse-riding” dance appeared on the screen, and then everybody in the crowd rose from their seats to clap and dance.

The same thing happened when the song was played at the Gangneung Curling Centre before the mixed doubles curling final match between Canada and Switzerland the previous day.

Since the PyeongChang Winter Olympics opened Friday, crowds dancing to K-pop tunes have become a common feature at the venues of ice sports such as short track, speed skating and figure skating.

K-pop has quickly become an important tool for creating cultural bonds between spectators from all over the world.

The music was a strong presence during the opening ceremony of the Olympics. Although there were no stage performances by K-pop stars, many K-pop smashes by Psy, BTS, TWICE, BIGBANG and Red Velvet were blasted in the Olympic stadium as delegations made their way in, making both athletes and spectators dance to the music.

But there are rumors that the closing ceremony for the Winter Games will feature K-pop talents such as EXO and CL, a former member of disbanded girl group 2NE1.

Would this potential turn into reality? Find out at the closing ceremony on Feb. 25.