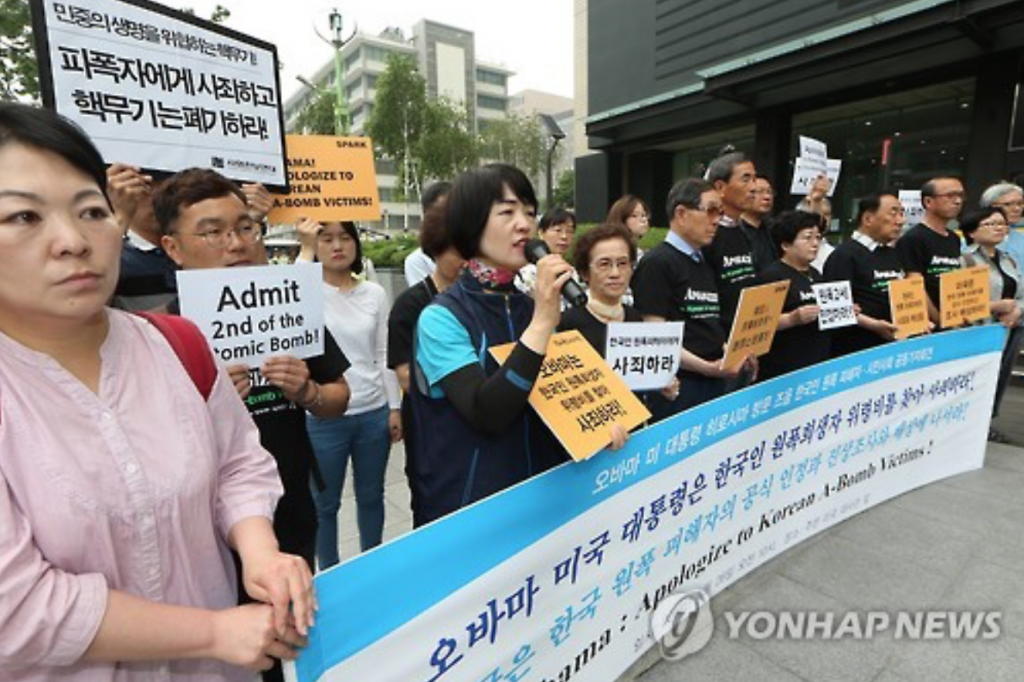 A group of South Koreans who survived the 1945 U.S. atomic bombing of the Japanese city of Hiroshima and their supporters shout slogans in Seoul on May 26, 2016, as they hold a rally to demand the United States and Japan offer them an apology over the bombing and compensate them. (image: Yonhap)

SEOUL, July 21 (Korea Bizwire) – A Seoul court on Thursday ruled in favor of the government and dismissed a compensation suit filed by South Koreans who survived the 1945 U.S. atomic bombings in Japan.

The Seoul Southern District Court turned down the suit filed by 230 victims of the Hiroshima and Nagasaki atomic bombings, seeking 10 million won (US$8,700) each in compensation.

They said the government neglected its duty to take active measures against Japan to settle the issue by referring the matter to an arbitration committee.

The plaintiffs cited a pact reached between Seoul and Tokyo to normalize their diplomatic ties in 1965, which stipulated that any disputes regarding implementation of the deal should be resolved through diplomatic channels and that what cannot be resolved in such way should be brought to a dedicated arbitration committee comprised of the two countries’ representatives and one from a third country.

“It is hard to say the government is obliged to start the arbitration procedure when it has been making efforts (to resolve the dispute) through diplomacy,” the court said.

An appeals court in Seoul had rejected a similar case filed by 79 members of an association of the Korean victims in January, saying the government has been constantly trying to settle the issue through diplomatic channels.

A similar case is pending at the Seoul Northern District Court.

“The justice department said the government made diplomatic efforts but there were no efforts made for the victims,” said Choi Bong-tae, the plaintiffs’ legal representative. “We will decide how to further deal with the issue after the Seoul Northern District Court’s ruling is delivered.”