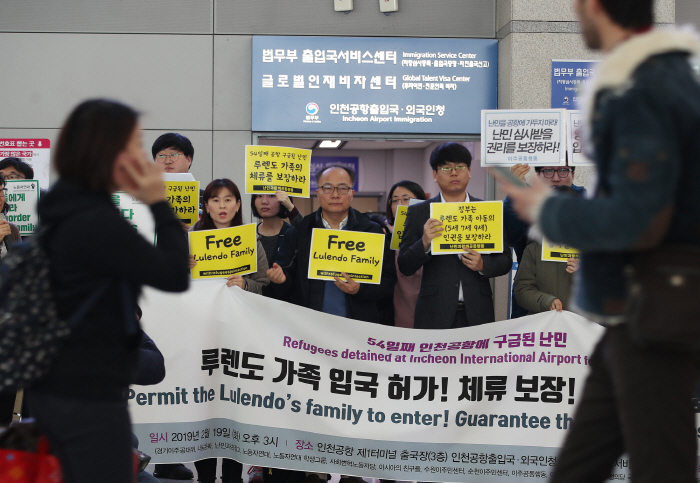 Members of a civic group supporting refugees rally at Incheon airport, west of Seoul, on Feb. 19, 2019, to urge the immigration office to grant entry to an Angolan family, who has been staying at the airport since Dec. 28, 2018. (Yonhap)

INCHEON, Apr. 25 (Korea Bizwire) — A South Korean court said Thursday it has dismissed a lawsuit filed by an Angolan family seeking to apply for refugee status while being stranded for almost four months at Incheon airport, west of Seoul.

The family, comprising Nkuka Lulendo, his wife and four children, said they came to South Korea after being persecuted in their home country of the Democratic Republic of Congo and filed the lawsuit against the chief of the Immigration Office at the airport.

The Incheon District Court rejected their claim by recognizing the immigration office’s judgment that the plaintiffs lack a clear reason for seeking refugee status.

“Thus it is not illegal for the defendant to decide not to put them before the deliberation on whether to grant them refugee status,” the court said.

The Lulendos, who arrived in South Korea on tourist visas on Dec. 28, has been staying in the transit zone of the airport for 119 days while fighting the immigration office’s decision to refuse them entry.

The immigration office made the decision on the premise that the family had no obvious reason for making applications for refugee status and came to South Korea only for economic reasons.

The family is pursuing an administrative suit, along with a civic group, known as the With Refugees Joint Action.

The civic group claimed in February that immigration took away documents for their application for refugee status that were not complete, conducted an interview with them for only two hours or less and failed to listen to the children.