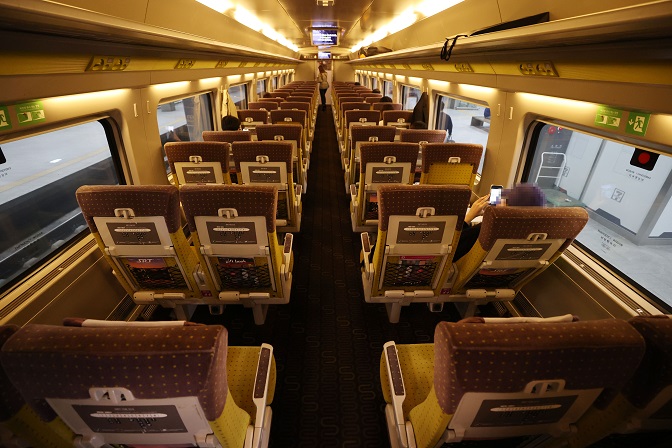 This file photo shows the inside of a South Korean express train. (Yonhap)

SEOUL, Oct. 19 (Korea Bizwire) — A salaried worker, who died in 2018 after traveling about 1,000 kilometers every week between home and work for about six months, has been recognized as a victim of an industrial accident by a local court, judicial sources said Monday.

The Seoul Administrative Court ruled in favor of the man’s bereaved family in their litigation against the Korea Workers’ Compensation and Welfare Service for the payment of survivors’ benefits and his funeral expenses.

The man, who was a 49-year-old mid-ranking sales manager at a manufacturing company, was found unconscious on an express train bound from Busan to Seoul and died later at a hospital on a Friday in June 2018.

His long-distance weekly commuting began in January of the same year, when his office relocated 450 kilometers from Seoul to Busan.

His bereaved family asked the state-run agency affiliated with the Ministry of Employment and Labor for the payment of due benefits under the Industrial Accident Compensation Insurance Act, saying his death was a job disaster.

After months of screening, however, the agency refused last year to pay any benefits, let alone funeral expenses, to his family, saying he may have died from deterioration of his underlying illnesses. The rejection led to the litigation.

“The victim was under enormous stress due to lack of achievements after the office relocation. He also suffered from cumulative fatigue because of the long-distance weekly commuting,” the Seoul court said.

In particular, the company raised its second-half sales target by 2 billion won (US$1.75 million) in early June, and its CEO repeatedly emphasized the importance of meeting the sales goal on the day of his death, the court said, adding the man was also taking good care of his underlying illnesses prior to the office relocation.