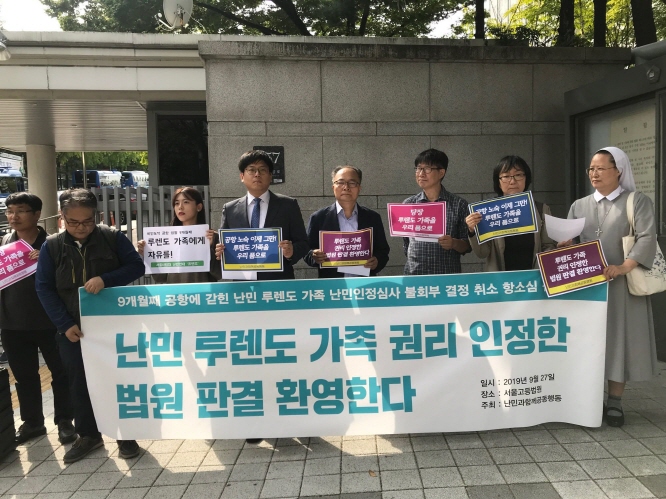 SEOUL, Sept. 27 (Korea Bizwire) – Overturning a lower court decision, a Seoul appellate court on Friday ruled in favor of an Angolan family stranded at the country’s main airport while applying for refugee status in the country after fleeing persecution in their homeland.

The Seoul High Court ordered immigration officials to grant the family a chance to apply for refugee status, ruling in favor of the Angolan family who has been staying at Incheon International Airport since their arrival on Dec. 28.

The Lulendo family, made up of Nkuka Lulendo, his wife and four children, are Angolan nationals but come from a Congolese background.

They cited persecution and prejudice against people with Congolese origins in Angola as the main reason for their journey to South Korea.

Immigration officials at the airport, however, denied them the right to file for refugee status on the assumption that the family had no clear reason for seeking refugee status other than economic motives.

The decision effectively blocked them from entering the country, leaving the family of six to live at the airport’s transit zone for nearly nine months.

The Incheon District Court in April recognized the immigration office’s claim that the plaintiffs lacked a clear reason for seeking refugee status, upholding the decision not to grant them a chance to apply for refugee status.

The appellate court, however, said it is hard “not to assume they did not have a genuine motivation to seek refugee status based on the fact they applied for refugee status after being denied entry.”

The appeals court ruled that the family should be given an opportunity to go through a deliberative process on granting refugee status, but also added that Friday’s ruling does not mean the family will be automatically acknowledged as refugees.

Lawyers and civic groups who support the Lulendo family welcomed the court ruling.

“When I told (Nkuka Lulendo) through Facebook messenger that we won, he replied ‘praise be to God’,” a pastor helping the family told reporters.

“It’s meaningful that the court acknowledged the family’s right to have their refugee application considered,” lawyer Lee Sang-hoon, who represents the family, said.

“The family did not have time to prepare proper documents as they were escaping persecution and the court acknowledged this. We hope this ruling will also change the society’s misconception of asylum seekers.”

Meanwhile, attorneys representing the Angolan family also urged the government to protect the rights of the family’s four children, aged under 10, citing a recent instance of the Lulendo children’s rights having been questioned at a UN committee meeting held in Geneva.