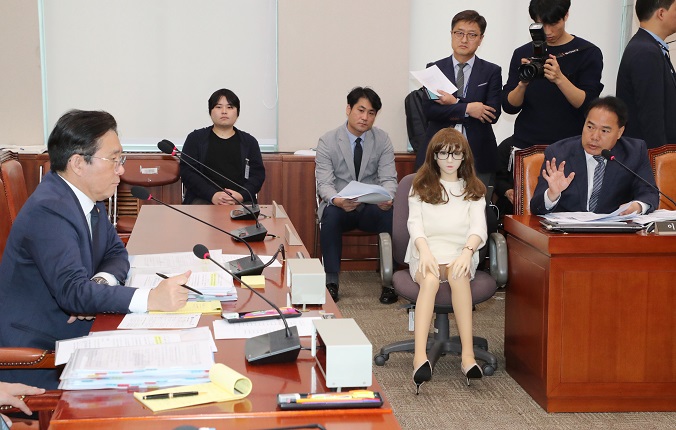 This file photo, taken Oct. 18, 2019, shows South Korean legislators debating over the import of lifesize sex dolls during an annual parliamentary audit on the Ministry of Trade, Industry and Energy in the National Assembly Complex in southern Seoul. (Yonhap)

SEOUL, Jan. 25 (Korea Bizwire) — A Seoul court has allowed the import of lifesize dolls, saying such sex toys for personal use do not corrupt public morals.

According to the Seoul Administrative Court on Monday, it has recently overturned a decision by Gimpo International Airport’s customs office to block the import of a mannequin.

In January 2020, a local company tried to import one sex doll from China through the airport in Gimpo, western Seoul. But the gateway’s customs authorities put the entry on hold, saying that the material would harm public morals.

It took legal action against the decision as its petition to the Korea Customs Service has been shelved.

“We don’t see this item as explicitly depicting body parts or sexual conduct that it gravely damages or distorts human dignity,” the administrative court said in its ruling. “It is not an example of materials that corrupt public morals.”

It said sex toys are used in a personal area and the state should not interfere with one’s private life to protect dignity and freedom.

The customs office said it will file an appeal against the court decision, saying that it is still keeping the stance of not permitting their customs clearance.

But the agency added it is in talks with the justice and gender equality ministries over the permissible standard of importing sex dolls as the Supreme Court ruled in favor of a sex doll importer in a separate clearance deferral case in June 2019.

The ruling had sparked a heated debate on whether sex dolls should be treated as a type of ordinary sex toy.

Between July and August of that year, over 200,000 people agreed with the petition on the presidential office Cheong Wa Dae’s website, asking for an import ban on sex dolls.