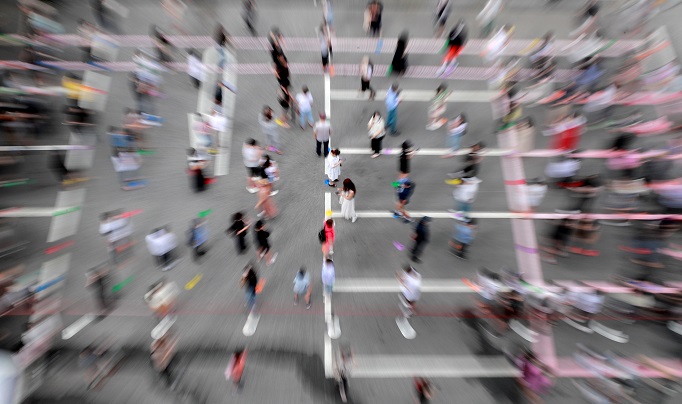 People wait to get tested for the new coronavirus at a screening center set up in front of a community health center in the southern Seoul ward of Gangnam on July 9, 2021. (Yonhap)

SEOUL, July 10 (Korea Bizwire) — South Korea on Saturday posted the highest-ever daily COVID-19 cases for the third straight day, as the country is set to impose the highest level of virus curbs on the greater Seoul area next week.

It marked the highest figure since the country reported its first confirmed infection on Jan. 20 last year.

It was also the first time that the nation’s daily cases rose above 1,200 for four straight days, as the nation is grappling with the fourth wave of infections.

Later in the day, health authorities and local governments said 1,108 new cases were confirmed from 12 a.m. to 9 p.m. Saturday, 119 fewer than at the same time on Friday.

Of them, Seoul and surrounding Gyeonggi Province reported 465 and 275 cases, respectively.

Saturday’s total case number is expected to reach the 1,200 range. Daily cases are counted until midnight and announced the following morning.

The government earlier announced plans it will raise virus curbs to the toughest level in the greater Seoul area, which includes the capital, the neighboring Gyeonggi Province and the western port city of Incheon, Monday for two weeks.

Under the Level 4 rules, private gatherings of three or more people will be banned after 6 p.m. and in-person classes will be closed.

Weddings and funerals can only be joined by relatives. Gatherings at entertainment establishments, including night clubs, pubs and sports games, will be ordered to shut down, while restaurants will be allowed to have dine-in customers until 10 p.m. 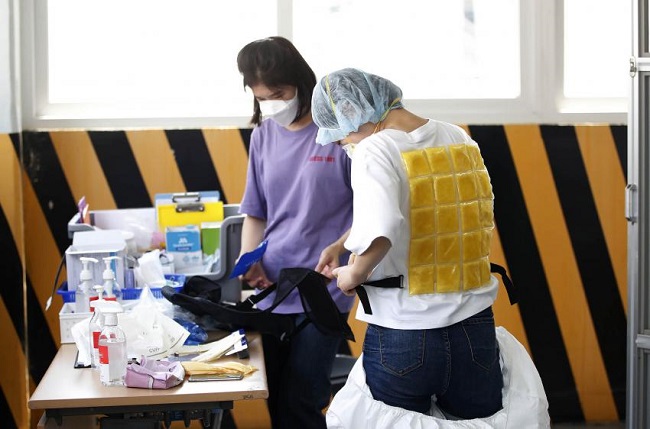 This photo, provided by the Buk Ward office in the southwestern city of Gwangju, shows health workers putting on cooling vests to fight the heat on July 9, 2021.

As the nation is hit by the fourth wave, health authorities warned that the worst may be yet to come.

If vaccinations gain pace and people strictly comply with virus curbs, the number could drop to between 260 and 415 in September, the KDCA said.

The government has been moving to achieve herd immunity by November by vaccinating more than 70 percent of its population.

As of Saturday, 30.3 percent of the country’s population has received the first COVID-19 vaccine injection, while 11.3 percent has been fully vaccinated.

The KDCA’s forecast comes as cluster infections have recently been breaking out across various places — such as companies, schools and department stores — across the greater Seoul area amid a surge in cases of the contagious delta COVID-19 variant.

A total of 104 cases have been identified in relation to a department store in southern Seoul, where 78 employees and 14 visitors have tested positive. More than 50 cases have also been traced to a restaurant in western Seoul.

In Incheon and Gyeonggi Province, 49 cases have broken out at an elementary school, while new clusters were reported at a cafe, a karaoke business, a hospital and a construction site.

Of the local infections reported Saturday, 501 came from Seoul, followed by 441 in Gyeonggi and 79 in Incheon, accounting for 77.3 percent of the total. It marked the first time the combined figures in the three areas surpassed 1,000.

New cluster infections were also reported outside of Seoul, with concerns rising that cases may balloon in the summer holiday season.

Cases reported with unclear infection routes between June 27 and Saturday accounted for 30.3 percent of the total, hitting the highest percentage since health authorities began compiling the data in April last year.

There were 58 additional imported cases, mostly from Asian countries, down 22 from the previous day.

The total number of people released from quarantine after making full recoveries was 153,153, up 655 from a day earlier.