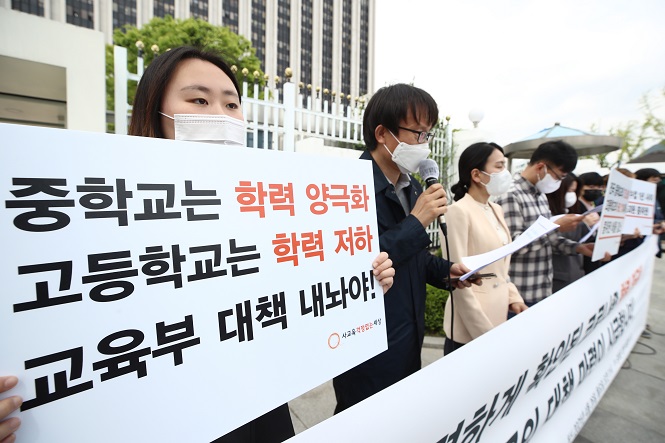 Members of a civic group dedicated to the campaign against private education hold a news conference on COVID-19-caused educational polarization at middle and high schools in Seoul on April 26, 2021. (Yonhap)

Domestic middle and high schools, which shifted to online classes for many months last year to stem the coronavirus pandemic, saw students in the middle level group shrink significantly, according to a civic group dedicated to the campaign against private education.

In particular, educational polarization worsened at middle schools and the weakening of scholastic abilities deepened at high schools, the group said.

According to the group’s analysis of math achievements at a randomly selected sample of 1,259 schools across the country, 75.9 percent of middle schools and 66.1 percent of high schools showed an on-year contraction of the middle level group (ranging from B to D grades) in the first semester of 2020.

In the same period, the low level group with E grade expanded at 56.9 percent of middle schools and 66.4 percent of high schools, the civic group noted.

“There were education gaps at local schools before, but a sharp reduction in in-person classes caused last year by the coronavirus pandemic led to reductions in middle level group students at both middle and high schools,” the group said.

“High schools, in particular, reported an expansion of the low level group as they had no choice but to maintain their academic difficulty level in preparation for the annual college entrance exam,” it said.