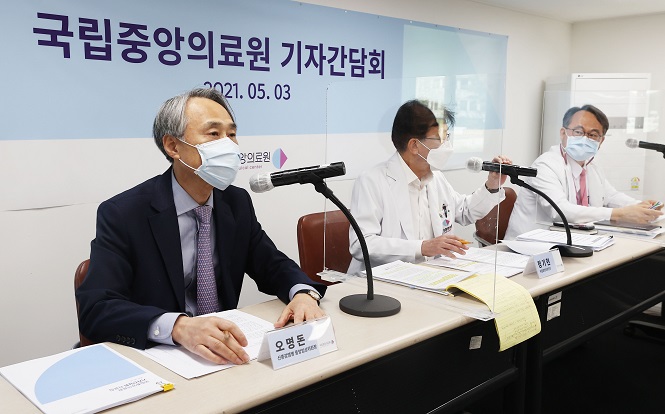 Oh Myoung-don (L), head of the country’s central clinical committee for emerging disease control, speaks during a press conference in Seoul on May 3, 2021. (Yonhap)

SEOUL, May 3 (Korea Bizwire) — Despite the ramped-up vaccine rollout, it will likely be difficult to reach herd immunity against the novel coronavirus, local health experts said Monday.

“The COVID-19 virus is likely to be a new normal,” said Oh Myoung-don, head of the country’s central clinical committee for emerging disease control, adding that immunizing 70 percent of the population will not lead to the goal of reaching herd immunity.

Herd immunity occurs when a large portion of the population becomes immune to a certain type of disease, making the spread of disease from person to person unlikely.

The committee earlier estimated that immunizing 70 percent of the country’s population, either through vaccinations or past exposure to the virus, will lead to herd immunity.

So far, the country has inoculated some 3.5 million people, accounting for some 6.6 percent of the 52-million population, since its vaccine rollout in late February.

COVID-19 vaccines, such as by Pfizer Inc., are 95 percent effective at preventing symptomatic disease, but it does not mean the vaccines protect people from being contaminated or from spreading the virus to others, according to the experts.

Herd immunity can only be achieved when the vaccines are effective in preventing secondary transmission, Oh said, citing research from Britain showing a preventive rate of between 38 and 49 percent following a single-dose shot.

Oh also said it is yet unclear how long the immunization following the vaccination will be held, citing recent research that concluded about six months.

Citing such various factors, the committee said it has concluded that the COVID-19 virus will most likely to become an endemic disease, much like influenza.

“We will have to live with COVID-19, like getting vaccinated against the seasonal flu,” Oh said, stressing the country’s vaccine rollout should be focused on first protecting high-risk population, such as elderly people.

The country reported 488 more COVID-19 cases on Monday, falling back to the 400s as fewer people took new virus tests over the weekend. The total caseload was increased to 123,728.