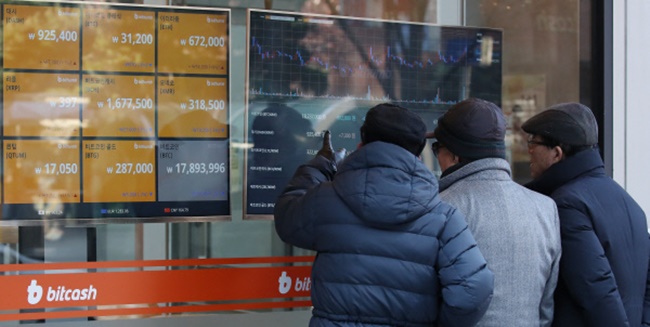 Despite a number of reports that the South Korean government would follow in China’s footsteps and ban all cryptocurrency transactions, the leaked proposal put to rest worries of an all-encompassing prohibition. (Image: Yonhap)

SEOUL, Dec. 14 (Korea Bizwire) – A leaked draft outlining the government’s cryptocurrency regulations has been met with a sigh of relief from investors, as earlier reports of an all-out ban seem to have been debunked.

Despite a number of reports that the South Korean government would follow in China’s footsteps and ban all cryptocurrency transactions, the leaked proposal put to rest worries of an all-encompassing prohibition.

In the document, a number of regulations were included, including a ban on minors and foreign nationals from holding an account or participating in cryptocurrency transactions, and prohibiting financial institutions from buying or possessing cryptocurrency.

Plans for a task force for taxation, and surveys and inspection to crack down on possible criminal acts were also included within the document, as well as clauses for ex officio investigation into cryptocurrency exchanges by the Korea Fair Trade Commission.

“Thought it’s a regulation proposal in name, it’s designed to tackle problems, while also fostering cryptocurrency businesses. Though not 100 percent, the proposal seems to have set the right tone,” one investor said.

Another says, “I was a little apprehensive about the regulation proposal, but it ended up following in Japan’s footsteps, not China’s. It shows that the government is poised to protect regular investors and weed out those who could be dangerous.”

Unlike China, the Japanese government has acknowledged bitcoin as legal tender and allowed independent bitcoin exchanges to be established to foster a healthy cryptocurrency market culture.

Opinions varied, however, on the reported consideration of taxation.

“The government is already talking about taxation. Since they have nothing to do with cryptocurrency transactions, I don’t understand why they want to tax,” one investor said in frustration.

Earlier this week, Financial Services Commission (FSC) Chairman Choi Jong-ku said during a meeting with reporters, “I don’t see bitcoin transactions as financial deals. They are not institutionalized transactions. So the authorities would never allow futures trading of such currencies.”

The leaked proposal overturns the widespread speculation in the cryptocurrency market that the South Korean government would make an all-out effort to discourage people from using cryptocurrencies such as bitcoin and ethereum in the country, despite their surge in popularity in recent years.