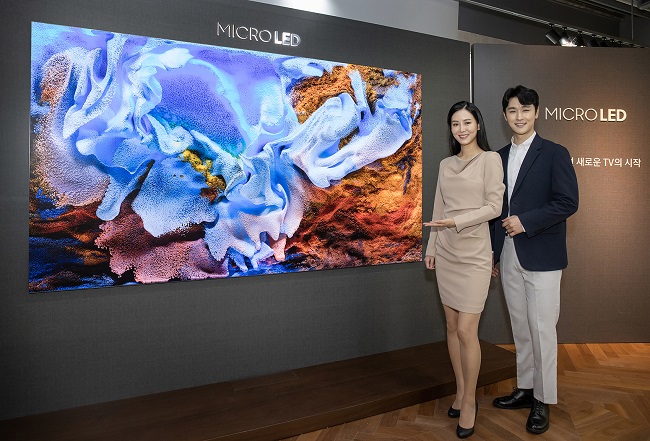 Samsung, which is leading the ultra large-sized TV market, is highly likely to release a 99-inch micro LED model by the end of this year. It recently secured certification from the National Radio Research Agency.

After releasing a 110-inch micro LED model early this year, Samsung plans to market a 99-inch model that will be followed by 88-inch and 76-inch models.

Samsung has also a 98-inch ultra large-sized lineup for mini LED and QLED. In particular, it has strengthened the lineup by releasing mini LED-based neo QLED 98-inch models in the latter half of this year.

To compete in the ultra large-sized TV market, LG has been mulling over releasing 100-inch models. Thus far, the largest OLED TV models have been 83 and 88 inches.

The primary reason why TV makers are releasing larger screen models is that the ultra large-sized TV market is growing at a blistering pace.

75 inch-plus models grabbed a share of 14.6 percent (value terms) in the global TV market in the first half of this year, up 4.4 percentage points from a year earlier, according to data from industry researcher Omdia.

One thought on “Samsung, LG Vie for the Upper Hand in 100-inch TV Market”