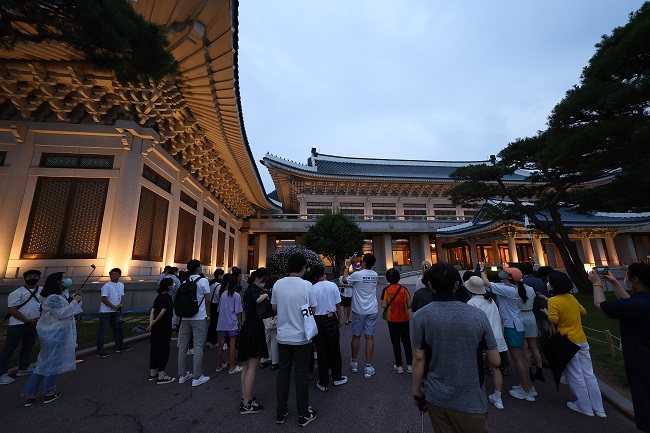 Visitors look around Cheong Wa Dae in Seoul on July 20, 2022, as nighttime tours of the former presidential compound began for a 12-day run until Aug. 1. (Yonhap)

SEOUL, July 21 (Korea Bizwire) — The culture ministry said Thursday it will push for transforming the former presidential home of Cheong Wa Dae in central Seoul into a multipurpose cultural complex.

Park Bo-gyoon, minister of culture, sports and tourism, reported the project to President Yoon Suk-yeol at his office as part of the ministry’s major work plans.

It marks the first time a government office has released a detailed plan to use the historical facility since it was opened to public access in May.

Cheong Wa Dae had been the presidential office and residence for the past 74 years before Yoon relocated the top office to the former defense ministry building in Yongsan in central Seoul.

During the Joseon Dynasty (1392-1910), it was used as the rear garden of Gyeongbok Palace, a main royal palace.

Under the plan, the culture ministry plans to use the facility for multiple purposes as an art museum, a presidential memorial hall and an arboretum, making full use of over 600 artworks, traces of former presidents who lived there, and about 50,000 trees and some cultural assets in the compound.

“The Ministry of Culture, Sports and Tourism will take the lead in the second stage, following the opening of Cheong Wa Dae in the first stage,” Park said of the plan during a press briefing held at the government building in central Seoul on Wednesday.

He stressed the government will make it “a living Cheong Wa Dae” where many cultural events can take place rather than maintaining it in its “static form.”

The government will also work with experts to devise ways to use it as exhibition space without hurting its value as a cultural heritage site so this project can become a role model of civilian-government cooperation, the minister said.

Yoon asked the minister to transform the Cheong Wa Dae compound into a cultural and art space displaying not only its existing collections but also other local works so that the people can easily enjoy them, deputy presidential spokesperson Lee Jae-myoung said after the meeting. 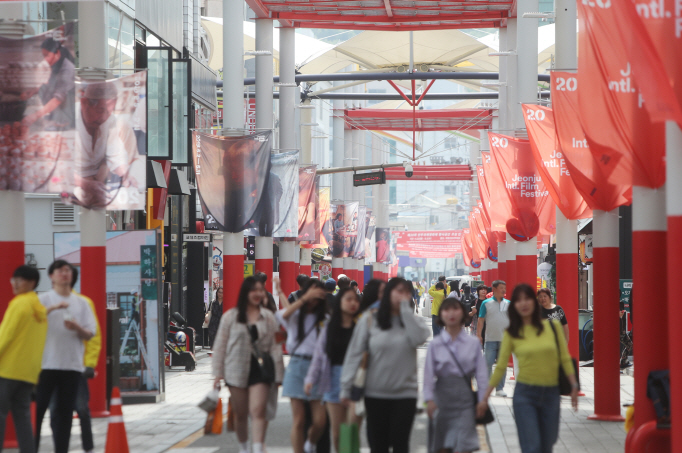 “The culture ministry’s most important role is to ensure fair access to culture,” Yoon was quoted as saying.

“When executing the artwork purchase budget of the culture ministry and its affiliated organizations, actively look for disabled and rising artists, and make sure their works are purchased first.”

Yoon further instructed the minister to secure more space for disabled, rising and young artists to display their works and perform on stage, and to significantly increase the size of the film promotion fund that was depleted during the pandemic.

The industry has already become a major sector of the country’s exports with its total exports reaching $11.9 billion in 2020, far more than $7.3 billion for home appliances and $4.1 billion for display panels, according to the ministry.

For the film industry, the government will push to provide tax deductions for movie tickets and expand the scope of tax credits for film production.

The culture ministry is also consulting closely with the finance ministry to increase the size of the public fund created to develop and promote the Korean film industry by 300 billion won (US$228.3 million) in the 2023-2025 period, according to Park.

In order to cultivate globally competitive homegrown streaming services, the ministry will create what it called a “drama fund” worth 40 billion won this year to help them create more original Korean series, as well as build two new film studios by 2023 and 2026, respectively.

The government will also support the development of virtual pop music performances and local showcases for emerging K-pop singers while seeking to spread the global boom of Korean culture known as “hallyu” to the metaverse, a network of 3-D virtual worlds focused on social connection, using new technologies.

For this, the government will nurture 10,000 talents in the content industry in the next three years, according to the ministry.