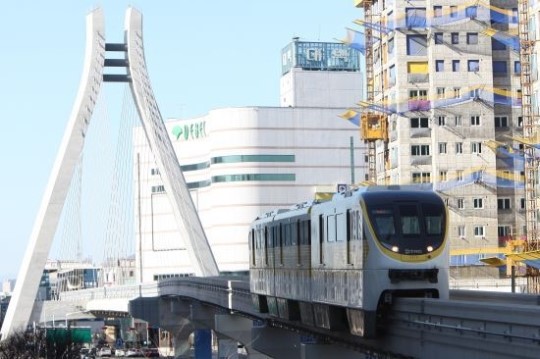 The monorail trains have been in testing for the last 10 months. (image:DTRO)

DAEGU, Feb. 11 (Korea Bizwire) – The Daegu Metropolitan Transit Corporation (DTRO) has started limited operation of its new no. 3 transit line, the first monorail train in Korea, with the goal of opening the service to the public in April, officials said in a statement on February 9.

For the next 60 days, 28 line no. 3 trains will be operational from 5:30AM to midnight. The DTRO is planning to go through 15,000 runs in total, and inspect any potential troubles in the managerial or technical domains.

The monorail trains have been in testing for the last 10 months. The DTRO inspected 271 safety issues such as driving and braking conditions and unmanned driving interfaces. The DTRO also completed a test on the safety of the system under harsh weather conditions, such as powerful wind gusts or heavy snow.

The 23.1 kilometer line with 30 stations is due to be officially opened on April 10.