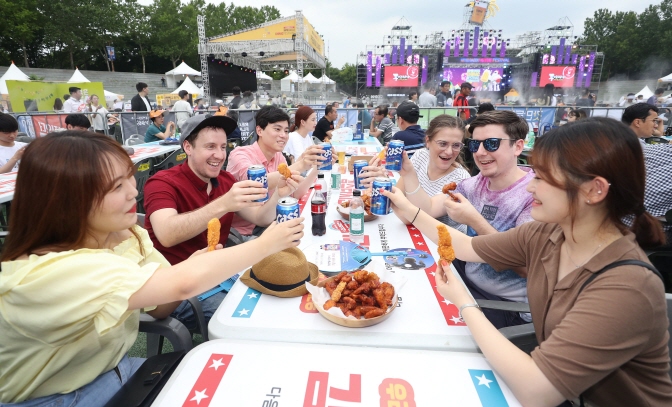 Daegu’s industrial foundation has led to the success of the Chimac (beer and chicken) Festival. (Yonhap)

DAEGU, Aug. 19 (Korea Bizwire) — Every end of July, the city of Daegu holds its signature Chimac (combination of chicken and beer in Korean) Festival to fight off summer heat.

The festival gathered more than 270,000 people over just three days when it first began in 2013, and won the title of Daegu’s most popular festival by welcoming more than 1.15 million visitors in 2018.

Behind Daegu strong reputation of being South Korea’s ‘shrine for chicken and beer’ lies the city’s industrial background.

Between 1950 and 1970, Daegu was already famous for its poultry farming industry, which heavily influenced the flavor and the marketing strategy of Korean-style fried chicken in the 1980s.

In 1978, Gyeseong Chicken opened up its first store in the Hyomok-dong area, where it introduced seasoned spicy chicken, which was an outright sensation during an era when people were used to eating fried or roasted chicken with salt.

Mexican Chicken’s success led other chicken brands to base their headquarters in Daegu.

Once, there were more than 90 chicken brands in Daegu, many of which were established by former employees or franchise owners of Mexican Chicken.

While ranked fifth in the number of franchises (1,037 stores), Kyochon Chicken outranks other competitors in sales as its average annual sales per franchise reached 577 million won last year.

Daegu’s industrial foundation has led to the success of the Chimac Festival. The city is also a testbed to see the potential of chicken franchises.

“Consumers in Daegu have a picky taste, and are normally uncomfortable with new brands. Once convinced, however, they tend to become very loyal,” said Park Jun, the organizing committee’s chairman.

“If your brand survives in Daegu, it can survive anywhere else in the country.”

Daegu’s poultry industry and chicken franchises are now turning their eyes to the new Food Industry Cluster that the city is planning to build.

The chicken franchises are hopeful that the new cluster will be comprised of not only manufacturing facilities, but also logistics and distribution centers where they can hold a variety of chicken and beer festivals year long.