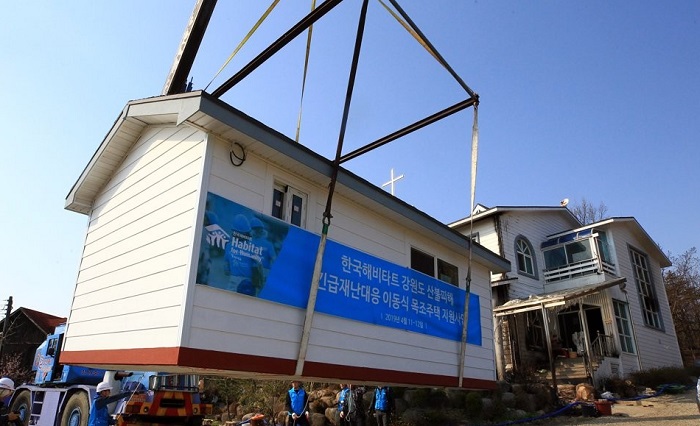 A makeshift wooden house is set up at a village in the northeastern border town of Goseong on April 12, 2019. (Yonhap)

SEOUL, Oct. 18 (Korea Bizwire) — Daewoo Engineering & Construction Co., a major builder in South Korea, is taking initiative to improve the residential environment of the Vietnamese living in the country.

The company announced that it had entered into a four-party business agreement with the Vietnamese Embassy in Seoul, Habitat for Humanity Korea and Wonosa Temple to commemorate the 30th anniversary of the diplomatic ties between Seoul and Hanoi.

Under terms of the agreement, Daewoo E&C will take part in a project designed to enhance the mutual relations between the two countries as well as to improve the residential environment for the Vietnamese residing in South Korea.

It will cover the entire project cost of 250 million won (US$210,700) to create murals and to build shelters, while its employees will be engaged in volunteering to build homes.

The site for the construction of shelters will be provided by Wonosa, a Vietnamese Buddhist temple, and is located in Cheonan, South Chungcheong Province. Habitat for Humanity Korea will be in charge of carrying out the project.

Starting from 2001, Daewoo E&C has been promoting a campaign to repair facilities for households suffering difficulty from the aging of their homes.