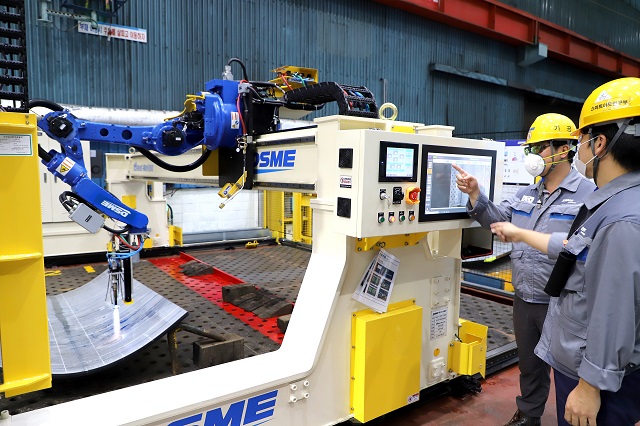 Workers at Daewoo Shipbuilding & Marine Engineering Co. point at the company’s AI hot working robot, in this photo provided by the shipbuilder on Oct. 20, 2020.

SEOUL, Oct. 20 (Korea Bizwire) — Daewoo Shipbuilding & Marine Engineering Co. said Tuesday it has developed an AI robot for metalworking in the construction of ships for the first time in the world.

The AI hot working robot, called Goknuri, is now used to shape steel plates into curved ones at the front and the rear of a steel hull in Daewoo Shipbuilding’s shipyard in Geoje Island, about 400 kilometers south of Seoul, South Korea’s leading shipbuilder said.

Hot working is the metalworking process carried out above 800 C to curve steel plates in the construction of vessels.