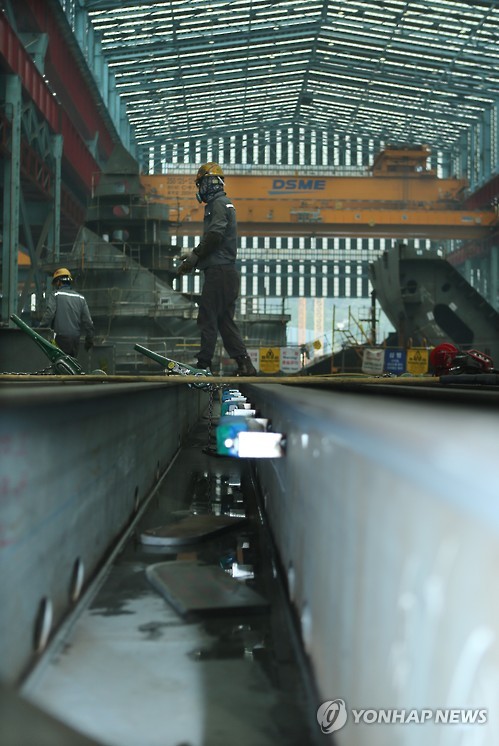 In the first half of the year, Daewoo Shipbuilding suffered a net loss of 1.19 trillion won (US$1.08 billion), with its debt ratio exceeding 7,000 percent. (image: Yonhap)

SEOUL, Oct. 12 (Korea Bizwire) – Daewoo Shipbuilding & Marine Engineering Co., a major shipyard here, said Wednesday that it plans to cut its workforce by about 20 percent before the end of the year in a bid to tide over a deepening industrywide slump.

Last week, the shipyard said it started receiving early retirement applications from its workers, seeking to cut the number of its employees by 1,000. The shipyard is also moving to trim its workforce by spinning off its business divisions.

In the first half of the year, Daewoo Shipbuilding suffered a net loss of 1.19 trillion won (US$1.08 billion), with its debt ratio exceeding 7,000 percent.

The shipbuilder also said earlier it will complete the sale of its headquarters building in downtown Seoul by the end of the month, a deal valued at 180 billion won, with noncore assets to be sold in the near future.

Meanwhile, Daewoo Shipbuilding said it plans to sell three floating docks depending on the market situation. Early this year, it already sold off two of its five floating docks.

The shipbuilder’s hastily announced self-rescue measures came as a draft report regarding the country’s shipbuilding industry says Daewoo Shipbuilding is the most financially shaky among the country’s big three shipyards and is projected to suffer a continued cash shortage.

According to industry sources, the report to be submitted by McKinsey & Co. to the government says the shipyard will not be able to stand on its feet due to a 3.3 trillion won cash shortfall by 2020.

The government will announce a set of measures later this month to revamp the country’s shipbuilding segment.