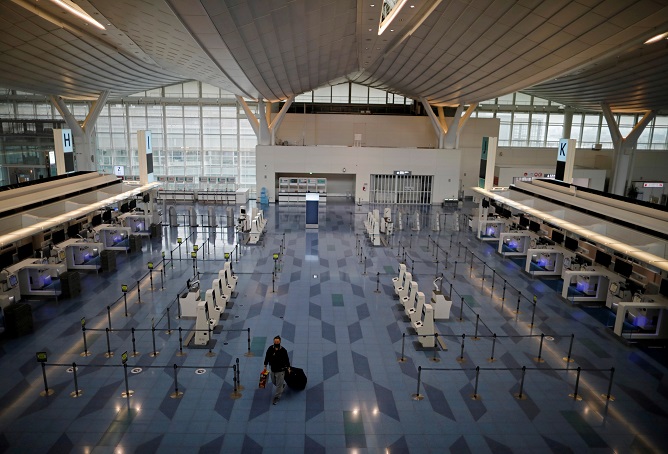 This photo shows a terminal of Incheon International Airport, just west of Seoul, on Dec. 29, 2020. (Yonhap)

SEOUL, Dec. 29 (Korea Bizwire) — South Korea’s daily coronavirus cases bounced back to over 1,000 on Tuesday after three days despite tougher virus curbs that have been extended for another week, and daily virus deaths hit a fresh record high of 40 amid a looming medical system crisis.

The country added 1,046 more COVID-19 cases, including 1,030 local infections, raising the total caseload to 58,725, according to the Korea Disease Control and Prevention Agency (KDCA).

The daily infections rebounded again from 808 cases on Monday and 970 on Sunday. The nation’s daily virus cases have hovered around 1,000 since mid-November.

Forty people died from COVID-19 in the past 24 hours, raising the death toll to 859 and marking the largest-ever daily total since the country reported its first confirmed virus case in late January.

By 9 p.m. Tuesday, the country confirmed 904 additional cases, according to the health authorities. By 9:30 p.m. Monday, the daily count point was 931.

A total of 629 cases were reported in the capital area comprising Seoul, Incheon and Gyeonggi Province. The KDCA compiles tallies newly confirmed infections nationwide by midnight and announces an update the following morning.

On Sunday, the KDCA extended the current Level 2.5 distancing measures in the capital area and the Level 2 restrictions in the rest of the country until Jan. 3 on concerns over the impact on the economy.

Health authorities will decide whether to move on to Level 3, the highest in its five-tier scheme, before the extended deadline.

Instead of applying measures that would deal a heavy blow to millions of small merchants, health authorities have deployed “targeted” virus curbs

The strongest-ever measures have been applied nationwide since last Thursday as well.

Ski resorts and famous tourism venues were shut down to slow the spread of the virus during the year-end holiday season and New Year’s holiday season. 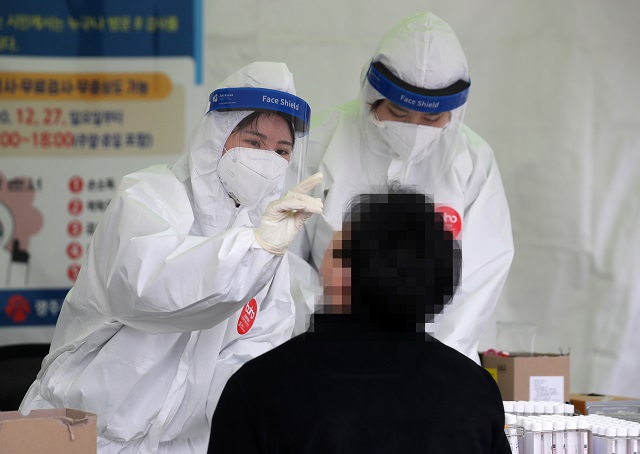 Medical workers collect a specimen from a man for a coronavirus test at a virus treatment center in Gwangju, 330 kilometers southwest of Seoul, on Dec. 29, 2020. (Yonhap)

Adding woes to the country’s battle against the pandemic, however, the KDCA on Monday confirmed a new, potentially more transmissible coronavirus variant from three people who arrived from Britain last Tuesday.

Health authorities said the three infected people had contact with 12 flight attendants and five passengers who tested negative for the virus. But they are still under a two-week quarantine and intensive monitoring.

The government said it will suspend all flights from London to Incheon until Jan. 7 to prevent the virus variant from spreading in Korea, while making all incoming passengers from Britain and South Africa submit documents that prove they tested negative for COVID-19.

In extended efforts to battle the pandemic, the Seoul government said U.S. biotech firm Moderna has agreed to supply COVID-19 vaccine doses for 20 million people to South Korea starting in the second quarter of next year.

Cheong Wa Dae said the country will have secured vaccines doses for 56 million people if the Moderna deal is officially sealed this week.

The government said it has delivered Gilead’s antiviral drug remdesivir to a total of 2,450 coronavirus patients in the country as of Tuesday. Remdesivir was originally developed to treat hepatitis C.

The country has been applying Level 2.5 social distancing rules in the greater Seoul area, home to half of its 51.6 million population, and Level 2 rules in the rest of the country.

A relentless spike in virus cases has spawned concerns about a shortage of hospital beds and a rise in fatalities. Health authorities have issued a rare order to private hospitals to secure more intensive-care beds for COVID-19 patients.

The third wave of the pandemic is raging across the nation. Of the newly identified local infections, nearly 80 percent of Tuesday’s cases were reported in the capital and the surrounding areas.

Of the local infections, 520 cases were reported in Seoul and 250 cases in Gyeonggi Province that surrounds the capital. Incheon, west of Seoul, reported 32 more cases.

The number of seriously or critically ill COVID-19 patients reached 330, up from 295 a day earlier.

The total number of people released from quarantine after making full recoveries stood at 40,703, up 1,435 from the previous day.

The country, meanwhile, added 16 imported cases, increasing the total to 5,334. Ten cases came from Asian countries except for China, followed by three from the United States and three from Europe.

The pandemic, which started in China late last year, has killed more than 1.77 million people worldwide and infected more than 81 million as of Tuesday, according to a tally from Johns Hopkins University.